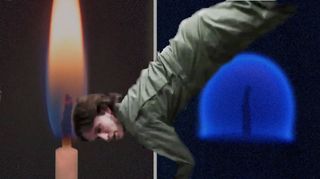 Imagine the way a candle burns on Earth. The flame is stretched like a teardrop and it flickers and jumps upwards. Take away gravity and fire looks much different. Flames burn more slowly and in an eerily spherical shape.

On famously nauseating zero-gravity flights out of Houston, Texas, this week, a group of engineering students will light four dozen floating fires to investigate how flames will burn when they are free of Earth's pull.

"We're trying to create some new knowledge," said Sam Avery, an aerospace engineering undergraduate at the University of California, San Diego, who is leading a team of flyers to NASA's Johnson Space Center. [Fun in Zero-G: Weightless Photos from Earth and Space]

Considering humanity's ancestors have been playing with fire for more than a million years, it's amazing that there's new knowledge to be created. But a weightless environment presents a rare opportunity to study how fire burns when free of gravity's constraints.

"[On Earth] the convective flow basically speeds up the combustion process and makes it so that you can't get an actual burning rate for your fuel," Avery told Space.com.

Through convection, hot air expands and rises around a fire as gravity causes colder, denser air to sink below. This process draws fresh oxygen to the fire and pushes out products of combustion (carbon dioxide, light and heat). But without this gravity-driven flow, flames lose their elongated, teardrop shape. They burn at a more sluggish rate, relying on molecular diffusion to feed oxygen to the flame, which actually makes certain characteristics like combustion rate easier to study.

In two separate flights as part of NASA's competitive Microgravity University Program, Avery's team is going to be measuring the burn rate of four different biofuels: butanol, ethanol, E85 and kerosene. (E85 is a fuel made up of 85 percent ethanol and 15 percent gasoline; Avery's supply was donated by a local gas station in California.)

During the flights, a modified Boeing 727 jet will fly up and down in a parabolic path, creating periods of weightlessness up to 30 seconds long. The UCSD team created a contraption that will allow them to light one droplet of fuel during each parabola. [Photos: Zero-Gravity Science with NASA]

Inside a triple-contained plastic cube, a medical syringe will squirt a blob of one of the fuels onto filaments arranged like crosshairs. When the fuel adheres to the wire cross, what's essentially a barbeque starter will swing around to set the droplet on fire. The fuel will burn for up to 10 seconds in a ball about 3-7 millimeters in diameter, Avery said. He is hoping to complete 12 or 13 trials for each of the four fuels.

Avery led a Microgravity University team through weightless experiments in July 2013, which Space.com's managing editor Tariq Malik got to witness firsthand. In that first round of trials, the students got to test only ethanol. With this next round of flights, the students will be able to compare the burn rate across four different types of fuels, and I'll be following Avery's group of flyers into the plane on Friday (April 11) as the team journalist.

The team members also made some changes to their equipment to make their tests more efficient. In their July trials, the igniter arm pulled back really fast, creating an airflow that increased the burning rate, Avery said. This time, the arm is rigged to move more gently. And the students took some flak for using flammable lithium polymer batteries, Avery said. This time around, they'll use a direct wall outlet plug to power their equipment.

NASA has used weightless flights to train astronauts since the days of Project Mercury, the United States' first manned space program. The space agency previously used a KC-135 "Weightless Wonder" aircraft, which also earned the nickname the "vomit comet." NASA began buying reduced-gravity flights aboard ZERO-G Corp.'s G-Force One in 2008. (Today thrill-seeking civilians with $5,000 to burn can buy a ticket on a commercial ZERO-G flight, too.)

Students can hitch a ride on a ZERO-G flight if they submit a stellar proposal to the space agency's Microgravity University Program. Avery's team is one of 18 chosen to fly this year out of Ellington Field here near NASA's Johnson Space Center. This week marks the first flight week of 2014 for the program. The full list of 18 teams can be found on NASA's website.

Editor's note: You can follow the progress of this week's NASA Microgravity University Program flight via the program's Twitter feed @NASA_RGEFP and by following the hashtag #DefyGravity.