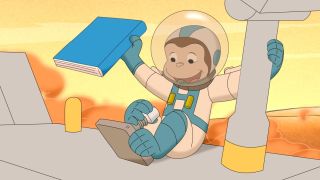 The adventurous primate Curious George is heading to Mars for the first time in a special TV episode of the cartoon airing Monday (May 19).

While Curious George has been to space before, this is the first time he is exploring the Red Planet. In the episode, "Red Planet Monkey," George needs to help engineers on Earth figure out what is making the rover's controls stick. The primate finds himself on an amazing adventure to Mars with his friend, the Man with the Yellow Hat. You can watch preview the new episode of "Curious George" on Space.com.

"'Red Planet Monkey' is just the latest of the inquisitive cartoon monkey's adventures in space, which date back to the very beginning of the space race," said Robert Pearlman, editor of the space history news website collectSPACE.com, a Space.com partner. "In just the fourth book in the now iconic 'Curious George' series, creators Margaret and H.A. Rey told the story of how their title character ended up becoming the first monkey in space. [Curious George in Space: Plucky Primate's Cosmic Adventures (Gallery )]

"Though history records a rhesus monkey named 'Albert II' as the true first monkey to leave the Earth, Curious George's fictional adventures have added to the cultural stories born out of and influenced by humanity's curiosity about space exploration," Pearlman added.

Real-life NASA astronaut Karen Nyberg will stop by to talk about her recent trip to the International Space Station during the episode. Nyberg spent about six months as a crewmember on the orbiting outpost before flying back to Earth in November. She will discuss the science of spaceflight and experiments performed on the space station.

Other astronauts who have flown to the space station are also fans of "Curious George."

"In February 2008, Curious George traveled into real space in the form of a T-shirt flown by astronaut and former NASA associate administrator of education, Leland Melvin," Pearlman said. "Melvin told collectSPACE he flew the shirt because it was one of the books his mother read to him as a child and that he 'always liked the fact that [George] was curious about life.'"

Young space fans can also play some cosmic "Curious George" video games online in anticipation of the new episode premiering next week. The games include "George's Planet Quest," "Curious George and the Rocket," "George's Paintbox" and a video all about space. Play the games here:
http://pbskids.org/curiousgeorge/busyday/rocket/