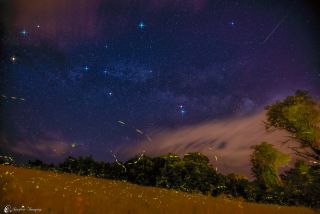 Flickering fireflies appear to create lines of light in a field beneath the Milky Way in this spellbinding long-exposure view by an astrophotographer.

The image was captured by Matt Pollock on June 7, 2013 in his backyard in Brunswick, New York. Pollock sent the photo in to Space.com this month, adding that it harkens back to a childhood memory.

"The picture was inspired from a childhood experience when I was about 8 years old. It was a warm night and I ran out to catch 'lightning bugs' in a jar with holes punched in the lid … I was no sooner tucked in (to bed) than I pulled out the jar and poured all my new found friends into the darkness. Oh what a glorious sight. The pyrotechnics were awesome," Pollock wrote in an email to Space.com. [Amazing Night Sky Photos (May 2014)]

Pollock's childhood memory of fireflies stayed with him and with careful planning, he was able to capture the bright bugs in this stunning image.

The image was blended into a composite to avoid creating long star trails and to highlight the so-called "Summer Triangle" star pattern of the Milky Way including the dark rift. The Summer Triangle is made up of three bright stars from three separate constellations. Vega in Lyra, Altair in Aquila and Deneb in Cygnus.