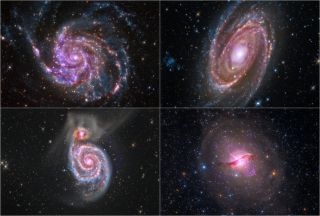 Talk about seeing your work in lights. Two amateur astrophotographers received invites from NASA to combine their work with that of the space agency — producing spectacular images of four galaxies.

NASA says that the newly combined pictures of four galaxies could mark the start of more "pro-am" (professional-amateur) collaborations in the future. The amazing photos were produced using optical images from Detlef Hartmann and Rolf Olsen that were combined with X-ray data from NASA's Chandra X-Ray Observatory and infrared data from NASA's Spitzer Space Telescope.

The collaboration provides scientific value that traditional professional telescopes are not able to offer, NASA officials said in a statement.

"The long exposures of these objects may help to reveal phenomena that may otherwise be missed in the relatively short snapshots taken by major telescopes, which are tightly scheduled and often oversubscribed by professional astronomers," NASA officials said. "Therefore, projects like this Astro Pro-Am collaboration might prove useful not only for producing spectacular images, but also contributing to the knowledge of what is happening in each of these cosmic vistas."

Joe DePasquale, Chandra's science imager, decided to involve amateurs after speaking at the NorthEast Astro Imaging Conference in 2013. He found Hartmann on the astronomy imaging website Astrobin and ran across Olsen's work in a news story about Centaurus A.

In the mosaic image, Olsen's work is visible on the picture of Centaurus A (lower right) while Hartmann's pictures were included in the pictures of M101 (upper left), M81 (upper right) and M51 (lower left). Their work was combined with archival pictures taken by the NASA telescopes.

"This was also a great venue to raise interest and awareness among the amateur astronomer/astrophotographer community as to the wealth of data available in NASA's various mission archives," DePasquale wrote in a blog post. "People are often surprised when they learn that data from NASA's Great Observatories program is free to use."