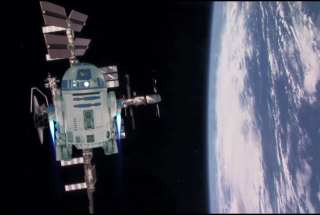 A NASA astronaut on the International Space Station beamed a special "May the Fourth" message to "Star Wars" fans on Earth with some help from the intrepid droid R2-D2.

NASA and Lucasfilms teamed up to produce a 1-minute video in honor of "Star Wars Day" — an unofficial fan holiday honoring the space opera on Sunday (May 4). Each year, "Star Wars" fans celebrate the beloved movie and book franchise on May 4. (That particular day was chosen because "May the Fourth" sounds a lot like "May the force be with you," a famous line from the movie.)

The new video starts by showing R2-D2 rolling through what looks like one of NASA's visitor's centers on Earth. The robot takes in the sights, while chirping in the usual R2-like way. R2 then gets a message asking the droid to help an astronaut on the space station send down a Star Wars Day message to Earth. Apparently, the Empire wants to stop NASA's Rick Mastracchio from sending his May the fourth message. R2-D2 leaps into action, helping Mastracchio beam down his hello to "Star Wars" fans on the planet. [Evolution of 'Star Wars': A Space Opera Timeline (Infographic)]

"Star Wars" has been in the news for other reasons this week as well. Just five days before Star Wars Day, Lucasfilm announced the cast for the first in a new series of "Star Wars" movies directed by J.J. Abrams. "Star Wars: Episode VII," due to hit theaters in December 2015, has a star-studded cast of actors from the original films and other new faces.

"We are so excited to finally share the cast of 'Star Wars: Episode VII,'" Abrams said in a statement announcing the cast. "It is both thrilling and surreal to watch the beloved original cast and these brilliant new performers come together to bring this world to life, once again. We start shooting in a couple of weeks, and everyone is doing their best to make the fans proud."