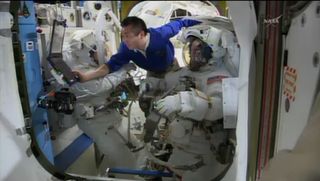 NASA astronauts Rick Mastracchio and Steve Swanson don their spacesuits with the help of Japanese astronaut Koichi Wakata (in blue) on April 23, 2014 ahead of a 2.5-hour spacewalk to replace a dead computer on the International Space Station.
(Image: © NASA TV)

Two American astronauts will venture outside the International Space Station today to replace a dead computer that serves vital systems on the orbiting laboratory, and you can watch their spacewalk live online.

NASA astronauts Rick Mastracchio and Steve Swanson are due to float outside the space station at 9:20 a.m. EDT (1320 GMT) and spend nearly three hours on the computer swap. You can watch the space station repair spacewalk live on Space.com.

Mastracchio and Swanson plan to spend 2.5 hours replacing a backup computer known in NASA parlance as a Multiplexer-Demultiplexer, or MDM. The device is a backup computer for routing commands to systems supporting the space station's solar arrays, robotic arm rail car and other critical systems along the station's backbone-like main truss.

The 10-year-old MDM computer failed on April 11 during a standard test. The primary computer in the system is working fine, but NASA station flight controllers ordered today's repair spacewalk to restore redundancy in the system.

There are 45 MDM computers on the International Space Station, with 21 of them located on the orbiting lab's exterior and the rest installed inside the station's habitable area. Replacing the MDM computer boxes is one of 12 core space station repair skills astronauts learn before launch, NASA officials have said.

Today's 2.5-hour spacewalk is substantially shorter than the typical six-hour excursions astronauts take outside the International Space Station. That's because the MDM computer replacement is the only task for Mastracchio and Swanson.

"We want to get this job done as quickly as we can, so we didn't want to add a whole bunch of things for this team to sort out," NASA space station program manager Mike Suffredini told reporters on Friday (April 18).

"I feel pretty strongly that we've sorted out the root cause and that our suits are in good shape," Suffredini said.

Today's space station repairs will mark the ninth career spacewalk for Mastracchio, and the fifth spacewalk for Swanson. Japanese astronaut Koichi Wakata and Russian cosmonauts Mikhail Tyurin, Oleg Artemyev and Alexander Skvortsov round out the crew. The spacewalk comes on the heels of two other major events for the six-man crew on the International Space Station.

On Sunday (April 20), an unmanned SpaceX Dragon cargo ship arrived at the station carrying 2.5 tons of fresh supplies and gear for the orbiting lab's crew. Then earlier today, at 4:58 a.m. EDT (0858 GMT), a robotic Russian Progress 53 cargo ship was due to undock from the station and park itself about 311 miles (500 kilometers) from the orbiting lab to test its new Kurs automated docking system. The Progress spacecraft is due to return to the space station on Friday (April 25).