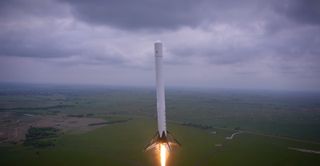 SpaceX's first Falcon 9 Reusable rocket prototype soars to a height of 820 feet (250 meters) above its McGregor, Texas launch pad in this view from an aerial drone video released on April 18, 2014. The F9R rocket is a SpaceX prototype for a fully reusable rocket launch system.
(Image: © SpaceX)

SpaceX's Falcon 9 Reusable rocket (Falcon 9R for short) soared about 820 feet (250 meters) into the air last week at the company's rocket development facility in McGregor, Texas, then came back down for a soft landing on the launch pad as planned, company representatives said. All of the action was captured in a dramatic two-minute Falcon 9R reusable rocket video released by SpaceX on Friday (April 18).

The video was shot by an airborne drone, giving a bird's-eye view of the eye-popping test flight. The Falcon 9R rises with its landing legs extended — a configuration that will change as the rocket makes more and more test flights.

"We will soon be transitioning to liftoff with legs stowed against the side of the rocket and then extending them just before landing," SpaceX wrote in a description of the video.

The Falcon 9R program is the latest step in SpaceX's quest to develop fully and rapidly reusable rockets, a key goal of the company's billionaire founder and CEO, Elon Musk. Reusable launch vehicles could eventually cut the cost of spaceflight by a factor of 100, Musk has said, opening up the heavens to sustained manned exploration efforts, such as the colonization of Mars.

SpaceX has been making big strides toward reusability lately. For example, the company wrapped up its previous reusable-rocket program, called Grasshopper, late last year after a series of ever-higher and more complicated flights.

And SpaceX managed to guide the first stage of its Falcon 9 rocket back to Earth for a soft ocean splashdown on Friday following the launch of the company's unmanned Dragon capsule on a cargo mission to the International Space Station.