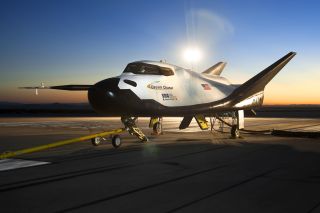 Astronauts, rocket-makers and other space leaders will descend on Southern California next week for the Space Tech Expo and Conference 2014.

Now in its third year, the three-day trade show will take place from Tuesday to Thursday (April 1 to 3) at the Long Beach Convention Center in the city of Long Beach. It will bring together scientists, engineers, executives, government agencies and policymakers for conversations on the key challenges and opportunities in civil and commercial space, the organizers say.

"The space business is making headlines; from Supermodel Kate Upton's recent zero gravity shoot, to the Red Bull Stratos record jump to Earth, to billionaire Richard Branson's Virgin Galactic venture offering wealthy thrill-seekers like Brad Pitt a ticket to ride in space, commercial interest in space is at an all time high” Gordy McHattie, event director for Space Tech Expo, said in a statement. "Private and public space ventures and the industry are abuzz with new energy, and even consumer brands are getting in the game."

Passes to the conference start at $395 but admission to the exhibition hall and a selection of events is free with registration. This year's free events will include a talk about academic-commercial partnerships in the space industry with a panel of speakers that includes William Pomerantz, vice president for special projects at Virgin Galactic and Mike Lopez-Alegria, former NASA astronaut and current president of the Commercial Spaceflight Federation.

The event's organizers say they are anticipating 2,000 people to attend. To look at the full agenda and list of speakers, visit the Space Tech Expo's website.