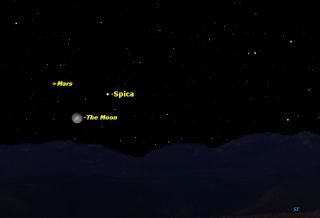 Tuesday, March 18, 10 p.m. local time. Look towards the eastern horizon around 10 p.m. and you’ll see the moon, two days past full, rising with the planet Mars to its left and Spica to its right.
(Image: © Starry Night Software)

If the weather is clear where you live tonight (March 18), you just might get to enjoy a cosmic triple play: the moon, Mars and a bright star shining bright in what promises to be ab eye-catching site.

To see the celestial meet-up, look low above the east-southeast horizon at around 9:30 p.m. tonight (your local time). Weather permitting, you should see the waning gibbous moon accompanied by a very bright planet Mars on the upper left, with the bright blue star Spica to the upper right. The night sky trio, resembling an isosceles triangle, will be visible all through the rest of the overnight hours.

On this night, Mars will be 64 million miles (103 million kilometers) from Earth. The Red Planet will rise like a brand of fire in the east-southeast about two hours after sunset. It is currently rising about five minutes earlier each night. This golden-orange world has now flamed up to magnitude -1 on the brightness scale used by astronomers (objects with negative number magnitudes are exceptionally bright). [Amazing Night Sky Photos for March 2014]

Excluding the moon, Mars has now risen to the rank of the third brightest object in the pre-midnight evening sky, rivaled only by Jupiter and Sirius, the brightest star in the night sky. It will continue to brighten dramatically through the balance of this month. In contrast, Spica shines only one-sixth as bright. Good telescopic views become possible at about midnight, as soon as the planet has climbed well up out of the murky, shaky skies near the horizon.

Mars is currently proving to be a most thrilling — though also a most challenging — planetary target at this time. Through a 6-inch telescope, magnifying at 150-power, the disk of Mars — which measures 13 arc seconds across — will appear in the eyepiece to be as large as the moon would look to the unaided eye.

The north pole of Mars is well-tilted toward us this spring, and the Martian northern hemisphere summer is drawing toward its end. Look for the shrinking north polar ice cap as well as for increasingly prominent (though still elusive) dark surface features.

Another hint of the coming close approach is the planet's change in course against the background stars.

After many months of direct (eastward) travel, Mars slowed to a crawl against the stars of Virgo in late February before beginning retrograde (westward) motion on March 1. It will pass 5 degrees north of Spica at the end of this month (your closed fist held out at arm's length covers 10 degrees of the night sky). Mars will not resume its normal eastward motion until May 21.

Editor's note:If you snap a great photo of Mars, the moon or any other night sky view and you'd like to share it for a possible story or image gallery, please contact managing editor Tariq Malik at spacephotos@space.com.