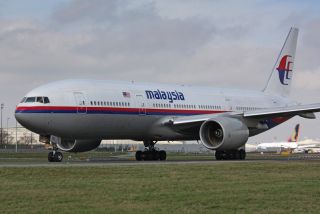 The lost Malaysia Airlines flight MH370 "pinged" a commercial satellite hours after the plane's communications systems were shut off, deepening the mystery of the missing airliner.

London-based satellite firm Inmarsat confirmed on March 14 that "routine, automated signals were registered on the Inmarsat network from Malaysia Airlines flight MH370 during its flight from Kuala Lumpur."

The flight, which was destined for Beijing, vanished on Saturday, March 8. Investigators now say the disappearance may have been the result of deliberate human action — but the location of the lost plane remains a mystery.

The Boeing 777 took off at 12:41 a.m. local time that day. At 1:07 a.m., it sent a routine transmission via the Aircraft Communications Addressing and Reporting System (ACARS). That was the last signal received by the system, which was apparently disabled near the east coast of Malaysia. [Fact About Satellites and Their Uses]

After this, the plane turned and flew wildly off course; the Malaysian military reports that its radar detected the flight west of the Malaysian peninsula, in the Strait of Malacca at 2:15 a.m.

The final clue to the flight's location comes from Inmarsat.  A satellite transmitter on MH370 "pinged" an Inmarsat satellite hourly with little check-ins, transmitting no data but signaling its presence. Using the time between the plane's "ping" and the satellite's response, investigators have drawn an arc of MH370's last known location, based on the final "ping" at 8:11 a.m. To the north, the arc reaches from southern Kazakhstan over Kyrgyzstan and western China. The southern arc stretches from just north of the Indonesian island of Sumatra into the southern Indian Ocean. It's not known how far the plane flew after making its last contact from some point along these arcs.

Inmarsat is now working with the U.K Air Accident Investigation Branch, which is one of the many agencies involved in the investigation of the missing plane. On Sunday, a Malaysia Airlines spokesman said that investigators are seeking satellite and radar data from 22 countries along the two search corridors. Malaysian police have visited the homes of both the pilot and co-pilot of the flight, and are investigating the plane's passengers and crew.