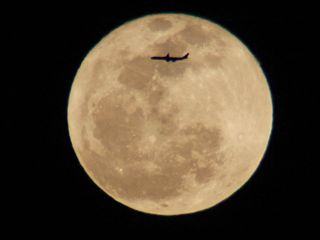 An airplane appears to cruise across the face of the massive full moon on Sunday (March 16) as it shined over Los Angeles in this outstanding photo sent in by California-based photographer Matt Hartman.

Hartman, of Shorealone Films, took the amazingly timed image the moon during as it reached its full phase for the month of March. The March full moon is also known as the Full "Worm" Moon. Hundreds of years ago Native American tribes in what is now the northern and eastern United States kept track of the seasons by giving names to each recurring full moon.

The Full Worm Moon was named to signify the softening of the ground and the reappearance of earthworm casts, which marked the return of robins. Northern tribes called this moon the Full Crow Moon, because the cawing of crows signaled the end of winter, or the Full Crust Moon because the snow cover becomes crusted from thawing by day and freezing at night. [The Moon: 10 Surprising Facts]

This moon was also named The Full Sap Moon, marking the time of tapping maple trees. Following their own customs European settlers created some of their own names. Since the lunar ("synodic") month is roughly 29.5 days in length on average, the dates of the full moon shift from year to year.