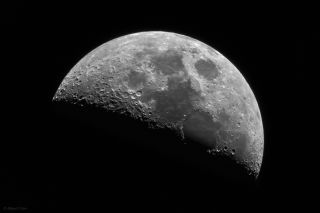 This photo shows the moon one day before it reached “first quarter,” with the disc 44 percent illuminated by the sun. Miguel Claro of Lisbon, Portugal captured the image on March 7, 2014.
(Image: © Miguel Claro | www.miguelclaro.com)

The delicate play between light and shadow brilliantly reveals the surface of the moon in these images recently sent to Space.com.

Astrophotographer Miguel Claro of Lisbon, Portugal, captured the stunning photo one day before the moon reached "first quarter," with the disc 44-percent illuminated by the sun.

"In this phase, we could see a lot of craters due to the game of light and shadows on its surface," Claro told Space.com in an email. [More Stunning March Night Sky Photos by Stargazers]

He also included an annotated version of the image, seen at a different angle. In this version, Claro changed the inverted position caused by the mirrors in his Maksutov telescope.

"It's very interesting to see the difference when we look at the same picture, but at a different angle," Claro wrote.  "We can easily see some craters in the original captured position and others in the corrected inverted position."

Editor's note: If you have an amazing night sky photo or video that you'd like to share for a possible story or image gallery, please send images and comments to managing editor Tariq Malik at spacephotos@space.com.