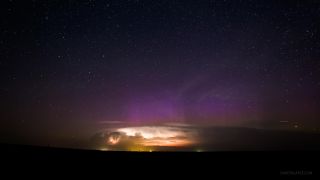 This image is a still showing an aurora behind a building thunderstorm from the time-lapse film "Huelux,” shot from April to November 2013, in South Dakota, Wyoming and Utah by astrophotographer Randy Halverson.
(Image: © Randy Halverson | Dakotalapse.com | facebook.com/dakotalapse)

Auroras dance, the Milky Way dazzles and lightning sparks in the night sky over South Dakota, Wyoming and Utah in a magnificent new time-lapse film.

The video, called "Huelux," was captured from April to November 2013, by astrophotographer Randy Halverson. Slow and fast moving satellites can be seen in shots of the Milky Way , and some meteors and airplanes can also be spotted in the video. The meteors appear as quick flashes because they only last one frame. "If you see a light moving across the sky, it is either an airplane or satellite, not a meteor," Halverson wrote on his website.

"The weather in 2013 made it difficult for me to get some of the shots I wanted," Halverson added. "There were many times I planned to shoot the Milky Way or aurora and the clouds would roll in, but that also allowed me to get more night storm time-lapse than I have any other year." [Northern Lights Photos: Amazing Aurora Views of 2014 ]

The video is set to an original score by Peter Nanasi. Halverson came up with the title from the words hue, a color property, and lux, which is Latin for “light.”

Some of the aurora images were unexpected, Halverson said. “Several nights I was setting up Milky Way shots, when I noticed the glow in the sky to the north.”

"In one case an hour before I got any aurora notification on my phone," He said. "The storm shot at 2:57, has aurora behind it, which was quickly covered up by the storm."

The end credit background images are 10-second, time-lapse exposures of Andromeda Galaxy and Orion taken with a 200 mm lens on an Ioptron Skytracker.

For more information and astrophotography footage by Randy Halverson, visit his site Dakotalapse.com or his Facebook page at facebook.com/dakotalapse. You can also watch the video via Halverson's Vimeo account here: https://vimeo.com/85134959