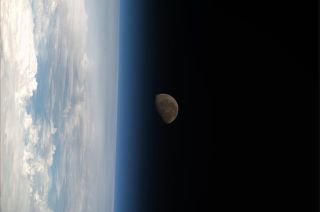 The moon sets over the limb of Earth in this spectacular photo by Japanese astronaut Koichi Wakata on the International Space Station on Feb. 21, 2014. Wakata is a flight engineer on the space station's Expedition 38 crew, representing JAXA.
(Image: © JAXA/Koichi Wakata via @Astro_Wakata)

Japanese astronaut Koichi Wakata has been accumulating an impressive orbital photo portfolio since he arrived at the International Space Station as a member of the Expedition 38 crew in November 2013. This, however, is probably one of the most beautiful photographs he’s captured — the moon as it sets over the limb of our planet.

Wakata posted the photo to his 73,300 Twitter followers on Feb. 21, with the message: "The moon setting on the blue earth atmosphere."

The Japanese space agency (JAXA) astronaut will no doubt be sharing more impressive space station shots as he continues his stay. The veteran astronaut is set to take over as space station commander, the first time a JAXA astronaut has done so, in March and will return to Earth in May. [See more amazing space photos by Koichi Wakata]