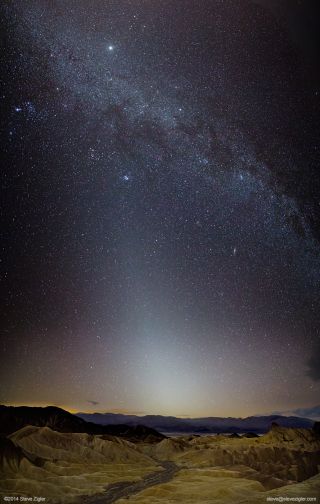 Astrophotographer Steve Zigler created this image in Death Valley during the new moon on Jan. 30, 2014. At center, stretching up, shines an intense display of Zodiacal light. Several other notable features gleam forth, including the winter Milky Way, the Andromeda galaxy, Jupiter, the Pleiades, and the Orion nebula.
(Image: © Steve Zigler)

The ethereal glow of the so-called zodiacal light glows over California's stark Death Valley in this amazing image captured by a patient amateur astronomer.

Astrophotographer Steve Zigler captured of the zodiacal light, which shines as an intense glow in the image's center, during a recent new moon. He merged six exposures together to create the scene.

The zodiacal light appears roughly triangular in shape in this view. It is caused by sunlight scattering from dust particles lying in the ecliptic, the imaginary plane that contains the planets orbiting the sun. Zodiacal light sometimes goes by the name of "false dawn." [Amazing Stargazing Photos for April 2014]

"I created this image in Death Valley during the new moon on Jan. 30, 2014. I was there with my friend, David Kingham, also a night photographer, who had been educating me on zodiacal light," Zigler told Space.com in an email. "We planned to view this phenomenon from Zabriskie Point, and I was excited about the possibilities afforded by this iconic location, but dense late afternoon clouds threatened our plans to the point where we almost didn't go."

Zabriskie Point lies in the eastern part of Death Valley National Park, close to the California-Nevada border, about a two-hour drive from Las Vegas.

"Having nothing else to do anyway, we went ahead with low expectations for success," Zigler said. "Wow, were we wrong! The sky cleared as the sun set, providing the spectacular dark night sky that makes Death Valley famous."

Editor's Note: If you snap an amazing picture or video of the night sky that you'd like to share for a possible story or image gallery, send photos, comments and your name and location to managing editor Tariq Malik at spacephotos@space.com.