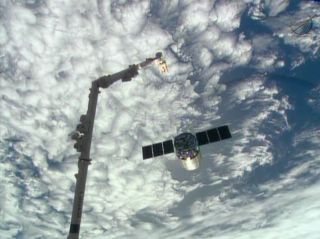 A monitor on the robotics workstation in the cupola provides the Expedition 38 crew with a view of Cygnus at the end of the International Space Station's robotic arm. Image released Feb. 18, 2014.
(Image: © NASA TV )

A commercial Cygnus cargo-carrying spacecraft departed the International Space Station on Tuesday, heading for a fiery finale over the Pacific Ocean to help clear the outpost of trash at the conclusion of the first operational resupply run by Orbital Sciences Corp.

The automated solar-powered spaceship disengaged from the space station's robotic arm at 1141 GMT (6:41 a.m. EST) as the duo sailed 260 miles over the South Atlantic Ocean east of Argentina.

Astronauts Mike Hopkins and Koichi Wakata monitored the activities from inside the space station's windowed cupola module. Hopkins was assigned the job of detaching the robot arm from Cygnus.

Moments later, astronauts inside the space station sent commands for the Cygnus spacecraft to fire thrusters and fly away from the complex. It cleared the space station's "keep out" sphere, an imaginary safety zone around the outpost, a few minutes after separating from the robot arm. [Photos: Orbital Sciences' 1st Cygnus Cargo Mission to Space Station]

The Cygnus vehicle's pressurized logistics module is packed with bags of trash and unnecessary gear loaded by the space station's six-person crew. Like cargo vehicles supplied by Europe, Japan and Russia, the Cygnus spacecraft is designed to burn up during re-entry, disposing of garbage over a remote stretch of the South Pacific Ocean.

Re-entry between New Zealand and South America is scheduled for around 1820 GMT (1:20 p.m. EST) Wednesday after a pair of braking maneuvers to slow the Cygnus spacecraft's velocity and lower its orbit.

The last day of the Cygnus mission will be controlled from Orbital Sciences' headquarters in Dulles, Va.

The Cygnus spacecraft is on the first of eight operationally cargo delivery flights under a $1.9 billion commercial resupply contract between Orbital Sciences and NASA. The space agency has a similar deal with SpaceX for a dozen missions worth $1.6 billion.

The mission delivered nearly 2,800 pounds of supplies to the space station when it arrived Jan. 12, three days after launching from Wallops Island, Va., aboard an Antares rocket.

The deliveries included an ant colony for students to observe how the ants behave in space, an experiment in drug-resistant bacteria, and investigations into how liquids slosh inside containers in microgravity and the behavior of fires in space.

The scientific complement of the Cygnus spacecraft's cargo load amounted to nearly 1,000 pounds, the biggest delivery of experiments to the space station by one of the two U.S. commercial logistics vehicles.

Orbital Sciences achieved a Cygnus demonstration mission to the space station last year before proceeding into the contracted flights.

SpaceX and Orbital Sciences developed their resupply freighters and launch vehicles with public and private funding through a public-private partnership with NASA, which turned to the commercial sector to haul experiments and supplies to the space station after the retirement of the space shuttle.

SpaceX plans a launch of its Falcon 9 rocket and Dragon spaceship from Cape Canaveral to the space station March 16. Orbital's next cargo flight is due to launch around May 1 aboard an Antares rocket from Virginia.