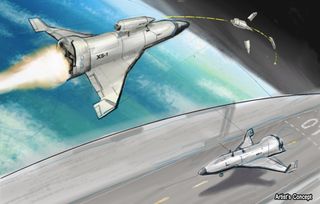 The United States military is making progress toward developing a new unmanned space plane, which it aims to begin flight-testing in 2017.

The Defense Advanced Research Projects Agency (DARPA) plans to award the first design contracts for the vehicle project — known as Experimental Spaceplane, or XS-1— in May or thereabouts, officials said. Current schedules call for the vessel to get off the ground for the first time in late 2017 and make an orbital test flight the following year.

DARPA has high expectations for the XS-1 program, which it hopes can eventually launch 3,000- to 5,000-lb (1,361 to 2,268 kilograms) payloads to orbit for less than $5 million per flight — and to do it at least 10 times per year. [Space Planes: Evolution of the Winged Spaceship (Infographic)]

"We're interested not just in launch, but also in seeing if we can find a way to enable more affordable, more routine, simpler hypersonic vessels," he added.

DARPA officials laid out their broad vision of the robotic XS-1 vehicle in a press release issued in September:

"XS-1 envisions that a reusable first stage would fly to hypersonic speeds at a suborbital altitude," they wrote. "At that point, one or more expendable upper stages would separate and deploy a satellite into low-Earth orbit. The reusable hypersonic aircraft would then return to earth, land and be prepared for the next flight."

But DARPA is leaving the specifics of the XS-1 system — which aims to provide routine, aircraft-like access to space — up its potential builders, Sponable said.

"We don't care if it's vertical take-off, horizontal land, vertical-vertical, which brings in a lot of the entrepreneurs," he said in the FISO presentation. "We don't care if they air-launch it, air-tow it, whatever. So we've left all those wide open."

The XS-1 program has enough money for one design contractor, which it plans to choose in 2015 after assessing the work done by the first-round awardees. However, Sponable holds out some hope that more than one vehicle could make it to the flight-test stage.

"I would love for somebody from NASA or the Air Force out there to step forward and say, 'Hey, there's obviously more than one of these things that we want to go flight-test; let's fly more than one," he said.

The vehicle developed in the XS-1 program could eventually transition to the commercial market, greatly reducing launch costs for many customers around the world, Sponable said. And the space plane could have many other applications as well.

For example, the XS-1 could serve as a reconnaissance satellite or a hypersonic-vehicle testbed, he said. The space plane could also help advance research into superfast point-to-point transportation around the world.

The XS-1 program represents a return to the bold aerospace projects of decades past, when engineers from various government agencies came together to push the spaceflight envelope, Sponable said.

"We stopped when we flew the X-15 back in the '60s; we didn’t do anything else," he said. "Well, that was a mistake — we should have continued pushing the technology, because we would not be in the dire situation with respect to space access that we're in today had we done so."