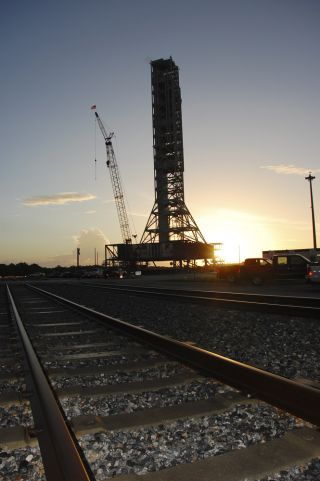 Railroad tracks loom large in the foreground in the Mobile Launcher photo, which was taken Feb. 5 by NASA photographer Ben Smegelsky.

The massive ML structure represents one of the key elements of ground support equipment being upgraded by the Ground Systems Development and Operations Program office at the Kennedy Space Center. The launcher is designed to support the assembly, testing, check out and servicing of NASA's new heavy-lift rocket, the Space Launch System (SLS), as well as transferring it to the pad and providing a launch platform for it.

The ML will carry the SLS rocket and Orion spacecraft to Launch Pad 39B for its first mission, Exploration Mission 1, in 2017. NASA spent two years and $500 million building the ML structure, which was originally slated to support the agency's Ares 1 rocket, a booster that formed part of the now-canceled Constellation program for moon exploration. Construction was completed in August 2010.