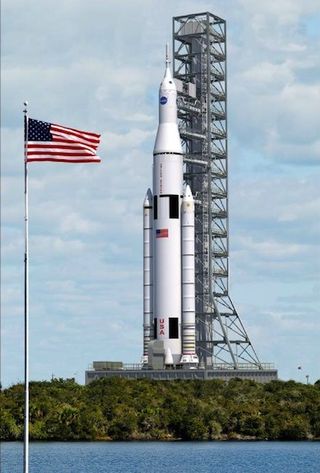 Artist's concept of the Space Launch System and the mobile launch platform rolling to the launch pad.
(Image: © NASA)

NASA intends to upgrade one of its Apollo-era treaded crawlers and an inactive mobile platform built for the canceled Ares launcher program to support the agency's colossal super-rocket, officially called the Space Launch System, in time for a test flight in 2017.

The modifications are part of up to $2 billion of work to prepare the Kennedy Space Center for the new heavy-lift rocket, which will initially be powered off the launch pad by three space shuttle main engines and two five-segment solid rocket boosters also derived from the shuttle program.

Although questions about its cost still linger, NASA plans to spend $10 billion to design and develop the Space Launch System for its first unmanned flight in 2017. Assuming the launcher is fully funded and remains near cost projections, it will be able to lift 70 metric tons, or about 154,000 pounds, into low Earth orbit on its first mission.

The $500 million launch platform built for the Ares 1 rocket is being tapped for the much more powerful Space Launch System. Declared structurally complete in January 2010, the mobile launch pad will have to be altered to support the heavier weight and additional thrust of the heavy-lifter, according to NASA officials. [Photos: NASA's Space Launch System for Deep Space Flights]

One of NASA's crawler-transporters will be made ready to haul the massive rocket and mobile platform between the Kennedy Space Center's Vehicle Assembly Building and launch pad 39B.

Larry Schultz, the mobile launcher project manager, said the biggest changes will be on the platform's base, where engineers will increase the size of a 22-square-foot exhaust duct and strengthen the surrounding structure. The SLS will weigh more than twice as much as the planned Ares 1 rocket.

The Ares 1 rocket would have featured a single solid-fueled first stage, while the Space Launch System will include two large strap-on boosters and a powerful core.

The thrust cutout will be expanded to a rectangle stretching 60 feet by 30 feet, according to Shultz. The modifications will be complete by 2016.

The 390-foot-tall Ares mobile launcher was being eyed as the launch platform for the commercially-developed Liberty rocket proposed by ATK, the contractor for the Ares 1's first stage and the space shuttle and SLS solid rocket boosters. Resembling the Ares 1, the Liberty rocket would combine a five-segment solid motor first stage with a second stage from EADS Astrium based on the core of the European Ariane 5 launcher.

According to Bob Cabana, director of the Kennedy Space Center, the Ares platform will be solely used by the Space Launch System. Cabana said the space shuttle's mobile launch platforms, which date back to the 1960s, could be available to commercial users interested in launching from KSC.

Unlike the shuttle platforms, the Ares/SLS mobile launcher features a 345-foot-tall tower on top of a 45-foot-tall base. The tower would provide access to various levels of the rocket during assembly and launch operations.

Pepper Phillips, program manager for 21st century ground systems at KSC, said engineers will "up-rate" the capacity of one of the two crawlers at the spaceport.

"For the time being, we are 'up-rating' the load capacity of one of the crawlers so that it can handle the heavier loads associated with the SLS," Phillips said. "We will perform some minor life extension mods to the second [crawler] to keep it in service."

Crawler-Transporter No. 2 will receive steel stiffeners and braces to address overstressed structural areas, increasing its lift load to 18 million pounds and extending its service life another 20 years, according to Amber Philman, a NASA spokesperson.

The top of a crawler is 90 feet on each side, the size of a baseball infield. It weighs about 6 million pounds by itself and has a top speed of 2 mph when empty.

Other upgrades will made to the crawler's jack, elevation and leveling system, which uses hydraulic actuators to keep rockets level on the four-mile journey between the VAB and the launch pad, including the trip up the incline to the pad surface.

The diesel-powered crawler's roller bearings have reached the end of their fatigue life and will also be replaced.

After an initial test in 2017, astronauts could board the Space Launch System on its second flight in 2021. Manned missions of the Orion multi-purpose crew vehicle and the SLS could explore asteroids, the moon, Mars, or venture to other destinations in deep space.

In its most powerful configuration, the Space Launch System will tower 400 feet tall and weigh 6.5 million pounds, making it the largest rocket ever built. The space shuttle weighed 4.5 million pounds at liftoff.