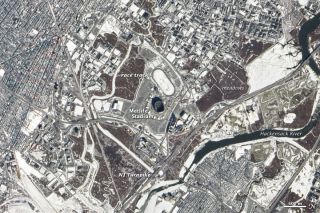 Thousands of football fans will pack New Jersey's MetLife Stadium for an epic Super Bowl showdown on live television today (Feb. 2), but here is one view you can only get from a satellite: The Super Bowl stadium as seen from space.

A NASA satellite spotted MetLife Stadium from orbit just days before today's Super Bowl XLVIII contest between the Denver Broncos and Seattle Seahawks. The view, captured by NASA's Earth Observing-1 satellite, shows the stadium in East Rutherford, N.J., as it appeared on Jan. 30.

"In the image, the south end of the stadium casts a long winter shadow over the field," Mike Carlowicz, chief editor of NASA's Earth Observatory, wrote in an image description. "MetLife is part of the Meadowlands Sports Complex, which includes the Meadowlands Racetrack (horse racing) and the Izod Center (indoor arena, east of MetLife, along the New Jersey Turnpike). A crust of snow, ice, and salt make the surrounding parking lots appear gray."

Super Bowl XLVIII is the first to be held in an outdoor stadium in a northern, cold-weather environment. In the last 48 years, the big game has been held either in a warmer region, or indoors. Despite recent snowstorms (current forecasts predict some snow late today), the weather is expected to be acceptable for the Super Bowl kickoff today.

Marshy "meadowlands" cam be seen around the MetLife Stadium as segmented brown patches, Carlowicz wrote. Some land around the sports and entertainment complex has been reclaimed and restored as wetlands for local wildlife.

"The wildlife this weekend will be in the stadium and its parking lots as Americans celebrate the big game," Carlowicz wrote.