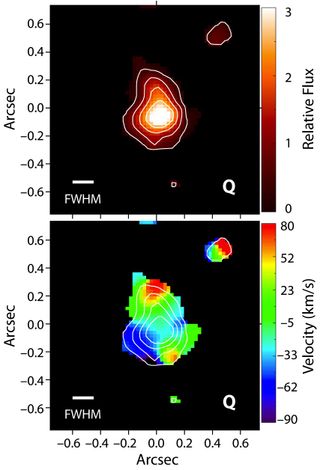 Hydrogen emission shows the structure of a young Milky Way-type galaxy, early in the stages of its formation.
(Image: © R. Jorgenson)

Astronomers have gotten their first clear look at galaxy in the very early universe that could have evolved into a structure somewhat like the Milky Way.

Made up predominantly of gas when spotted while the Milky Way was only about 3 billion years old, the galaxy, DLA2222-0946, should one day evolve into a common spiral galaxy like the Milky Way. Yet its commonness is what makes it so important, as it should provide insights into the formation of the bulk of galaxies early in the life of the universe.

"It's sort of extraordinary for being ordinary," Regina Jorgenson, of the University of Hawaii, said in early January at a press conference at the American Astronomical Society meeting in Washington, D.C. [How Galaxies are Classified by Type (Infographic)]

A light bulb on Mars

Jorgenson and her team used the Keck Telescope in Hawaii to obtain the first spatially resolved images of these young, normal galaxies. Although their existence has been known for decades, they have been a challenge to clearly resolve.

"It's equivalent to detecting a 50-watt light bulb on Mars," Jorgenson said.

Early galaxies contained primarily dust, the food for star formation. Jorgenson compared the process of galaxy formation to baking a cake, which requires a lot of different ingredients, the most of important of which is flour. In a galactic cake, the flour is equivalent to neutral gas, the prime fuel for star formation.

Gas doesn't shine like stars, so astronomers had to get creative to find it in distant space. Enter a quasar, a very bright and distant astronomical source. As light from a quasar passes through these kinds of galactic systems known as DLAs, scientists can take measurements of the clouds of gas that make them up.

But the single line of sight provided by the quasar limits how much of the galaxy can be seen. Jorgenson compared it to a single car headlight in a cloudbank. Adding to the challenge, the quasar whose bright light illuminates the galaxy also outshines it, making other emissions from the young group difficult to detect.

The team utilized used the advanced technologies of the Keck telescope to resolve the image and spectra, the measure of its separated energy wavelengths, of DLA2222-0946. Keck allowed for a significant improvement in resolution.

"It's akin to reading the President's newspaper in the White House [from] six miles away," she said.

The results will be published in an upcoming edition of the Astrophysical Journal.

Located approximately 10.8 billion light-years from the Milky Way, DLA2222-0946 formed about 3 billion years after the Big Bang (the universe is estimated to be roughly 13.8 billion years old).

When spotted, it looked nothing like the spreading spirals of the Milky Way. The young galaxy is only one-sixth the size of our galaxy and 1/200th the mass. However, the massive supply of gas contained within it means it produces about 10 times as many stars as our galaxy.

Because looking over broad distances in space is akin to looking back through time, scientists are able to see the DLA the way it appeared 10.8 billion years ago. Over time, these 'baby Milky Way galaxies,' as Jorgenson termed them, likely grew into galaxies that resemble our own. A clear resolution of DLA2222-0946 and other DLAs will provide insight into the evolutionary steps taken by galaxies like the Milky Way.

"This is something astronomers have been trying to do for over thirty years," said Jorgenson.