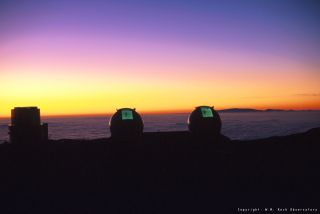 Photo of the Keck I and II domes at sunset, used as cover art for the award-winning DVD "The Kecks of Mauna Kea."
(Image: © W. M. Keck Observatory)

The W.M. Keck Observatory atop Mauna Kea in Hawaii is a renowned astronomy shortstop. When scientists see an exoplanet or other interesting finding in a telescope, Keck is often used to confirm it. Sometimes, of course, Keck leads the way itself.

Over the years, Keck has worked with other observatories to figure out more about the universe around us. Its top discoveries span anywhere from the Earth's solar system to the outer reaches of space.

Here is a look at the Keck Observatory's 10 most amazing discoveries:

Using Keck, astronomers found what they suspected was an exoplanet around star HD 209458 by detecting the "wobble" or gravitational tug a planet produces while whipping around a star. Using the measurements, they asked another astronomer at the privately funded Fairborn Observatory in Arizona to see if the planet would cross over the star in his field of view. It did. "This is the first independent confirmation of a planet,” said Geoffrey Marcy, a professor of astronomy at the University of California, Berkeley, at the time. [Amazing Alien Planet Discoveries]

Keck plotted the motions of stars on the edge of the Andromeda galaxy, Earth's closest galactic neighbor at 2.5 million light-years away. Astronomers figured out that the stars are moving in connection with the galaxy, making the diameter of the galaxy three times further than previously thought. The galaxy was estimated at 220,000 light-years across, compared to previous estimates of 70,000 to 80,000 light-years. [Artist Views of Andromeda Galaxy's Crash with Milky Way]

NEXT: Helping to Kill Pluto

Keck was used to gain more information about Eris, a large object discovered beyond the orbit of Pluto. When a moon popped up in the images, astronomers speculated Eris might even be larger than Pluto. (That's still under debate.) Eris' large size was one large spur behind Pluto's demotion from planetary status to dwarf planet in 2006. [Meet the Solar System's Dwarf Planets]

NEXT: Center of the Milky Way

Keck helped a group of California astronomers measure the motions of individual stars near a huge black hole lurking in the center of the Milky Way Galaxy, the galaxy where Earth resides. The stars' motions let astronomers pinpoint the exact center of the galaxy for the first time. These stars whip around at 3 million miles per hour, a vast difference compared to Earth's motion of 67,000 mph in its orbit around the sun. [Our Milky Way Galaxy: A Guide (Infographic)]

From measuring the redshift, or movement, of galaxies near the edge of the universe, astronomers figured out that the brightest galaxies were probably formed about 2 billion years after the Big Bang, the event that likely sparked the universe. (Older galaxies tend to move faster.) Keck contributed to the multi-observatory discovery by detecting the spectrum of hydrogen gas that was perturbed by nearby stars or released by galactic black holes.

Keck and several other telescopes peered at supernovas, which are star explosions, to chart the rate at which the universe is expanding. Measurements indicated the universe's expansion is accelerating, fuelled by a mysterious process called "dark energy."

NEXT: Planetary Disc Around Dying Stars

Planetary Disc Around a Dying Star (2007)

While astronomers believe most planets form around young stars, Keck and the Chilean Gemini South telescope found an old star with a protoplanetary disc around it. Mira A is shedding dust at the rate of one mass of Earth every seven years. About 1 percent of that material is held in place by a companion star, Mira B. This means new extrasolar planets can arise in interesting places, the scientists said. [Discovery Story: Dying Star Builds Planets]

Keck, along with Gemini South, captured an image of a then-newfound extrasolar planetary system some 140 light-years away from Earth. At the time, astronomers said the star HR8799 has three planets that are 10, 10 and seven times the mass of Jupiter. [Discovery Story: New Method Could Photograph Earth-Like Planets]

NEXT: Water in Protoplanetary Discs

One big question concerning Earth's formation is how the water got there in the first place. Scientists using Keck and NASA’s Spitzer Space Telescope said they were a step closer to understanding water in early solar systems after finding water vapor in two extrasolar protoplanetary discs. "While we don't detect nearly as much water as exists in the oceans on Earth, we see only a very small part of the disc — essentially only its surface — so the implication is that the water is quite abundant," stated paper co-author Geoffrey Blake, a planetary sciences professor at the California Institute of Technology.

NEXT: Methane on Mars

Mars, to use Monty Python parlance, is not dead yet, astronomers said when they announced the planet is emitting methane. Keck and NASA's Infrared Telescope Facility took spectrometer measurements of the Red Planet and detected methane's "signature" among the absorption lines. Methane is produced both chemically and biologically, meaning no one can say for sure what is producing the gas. "If microscopic Martian life is producing the methane, it likely resides far below the surface where it is warm enough for liquid water to exist," the press release stated. [Where is the Methane on Mars? (Video)]