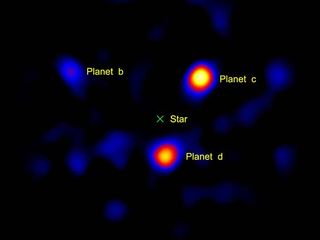 The three planets of the HR8799 system. The planets, though to be gas giants more massive than Jupiter, were first imaged in 2008, and again detected with the new vortex coronagraph.
(Image: © NASA/JPL-Caltech/Palomar Observatory)

Compared to current methods that can only photograph verylarge planets beyond our solar system, a new way of directly imaging planetsorbiting other stars could be used to discover alien worlds that are smaller,more Earth-like, closer to their suns and further away from our own solarsystem.

Several methods for detecting extrasolarplanets exist, including ones that use powerful, large telescopes todirectly image the light coming from these distant worlds. The new method,which uses a device called a 'vortex coronagraph,' allows astronomers to searchout these alien worlds using just a small portion of a telescope.

To show that the device worked and could detect exoplanets,Gene Serabyn, of NASA's Jet Propulsion Laboratory in Pasadena, Calif., and hiscolleagues used it with a 1.5-meter (5-foot) portion of the Palomar Observatory?sHale Telescope, located north of San Diego. With it, they detected threepreviously discovered exoplanets that orbit the star HR 8799.

The three planets, called HR8799b, c and d, are thought tobe gas giants similar to Jupiter, but more massive. They orbit their host starat roughly 24, 38 and 68 times the distance between our Earth and sun,respectively

These planets, among the firstto be directly imaged, were originally detected by two much largertelescopes: one of the two 10-meter (33-foot) telescopes of W.M. KeckObservatory and the 8.0-meter (26-foot) Gemini North Observatory, both on MaunaKea in Hawaii.

"We managed to see these planets with a telescopethat's smaller than one panel on the Keck telescope," Serabyn said.

Seeing these planets with a much smaller telescope suggeststhat if this device is used on bigger ground-based telescopes, astronomers willbe able to find planets around stars that are further away from us, that orbitcloser to their star, and/or that are smaller and more Earth-sized (most of theexoplanets that have been discovered to date are much larger, Jupiter-sizedworlds).

"What this does is it allows you to consider using amuch smaller telescope, and something that's much more affordable, to look forEarth-like planets," Serabyn told SPACE.com.

The device could also be put on space telescopes, whichwould currently have to be very large and likely cost-prohibitive to doexoplanet detection like this.

Serabyn estimates that even on a 2-meter space telescope(one with an opening just over 6 feet wide), this device could help detect aplanet within one astronomical unit (that's the distance between the Earth andthe sun, or about 93 million miles, or 150 million kilometers) out to adistance of about 30 light-years. (A light-year is the distance that light cantravel in one year, or about 6 trillion miles, or 10 trillion kilometers).

The new method works by combining adaptiveoptics ? sets of mirrors that bend and re-bend light thousands of times persecond to remove the distortion effects of the Earth's atmosphere ? with acoronagraph, a telescope attachment that uses a black dot to block out directstarlight so that nearby objects, which would normally be obscured by thestarlight, can be resolved.

But the problem with a traditional coronagraph is that someof the starlight leaks around the black dot obscuring the light of possibleplanets, especially those that orbit close to their stars. To solve thisproblem, Serabyn and his colleagues used "a spiral pattern" thatwould shift the light in such a way that "it pushes all thestarlight outside of the beam oflight and it leaves the planet light, which didn't actually go throughthis central vortex, just going straight through," Serabyn explained.

Serabyn plans to discuss using this device on largertelescopes in the near future. "At the moment what we have is good enoughto use on any ground-based telescope," he said.

The device and the detection of the three exoplanets aredescribed in the April 15 issue of the journal Nature.