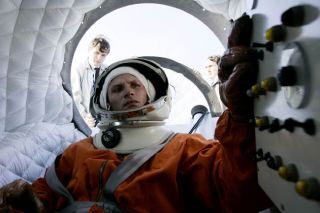 Thecompetition between the U.S. and Soviet Union to be the first to land humans onthe Moon during the 1960s takes a personal turn in a new television mini-seriesto air Sunday.

Instead offocusing on astronauts with the right stuff or spaceships, the NationalGeographic Channel's "Space Race: The Untold Story" spotlights two scientists -Wernhervon Braun with NASA and Soviet Union chief designer SergeiKorolev - as they pushed rocket technology from its ballistic missile rootsto the high frontier.

Based onthe book of the same name by Deborah Cadbury, the two-part "Space Race" delvesdeep into the personal lives of von Braun and Korolev as the competition forever-more advanced rocket technology during the Cold War between the U.S. andSoviet Union sent them on their respective paths.

"It's avery unusual tale of rivalry because obviously in America, with a free westernpress, everything that von Braun did was totally visible to Korolev," Cadbury toldSPACE.com. "From von Braun's point of view, his rival in the SovietUnion was totally hidden."

By drawingon unclassified documents both the U.S. and Russia, provides a balanced look atthe two nations' space efforts, rather than the typically U.S.-heavy accountsrelated in the past. A treasure trove of Korolev's personal history obtainedfrom the family his former biographer, as well as actual video of Russia's firstR-7 rocket launches,failures, and successes - such as cosmonaut Yuri Gagarin'sfirst spaceflight in 1961 - cap "Space Race's" effort to recreate thecountry's orbital ambitions, Cadbury said.

Korolev'srise from a lowly prisoner to chief rocket designer is as remarkable as vonBraun's history as an S.S. officer with the Nazi Party during World War 2 isshady. "Space Race" does not let the legacy von Braun, who died in 1977, comeclean of the slave labor used to build the V2rockets designed by the Germanscientist's team during the war.

"There areat least two documents that show he was involved in recruiting skilled laborfor the V2 rocket program," Cadbury said.

In herbook, Cadbury adds that concentration camp survivors also published eyewitnessaccounts of von Braun and the V2 slave labor use after the rocket scientist'sdeath. But during the space race's formative years, his role was played down bythe U.S. officials, she said.

"At thattime, America was in its full glorious years and von Braun's past had been verycleverly concealed," Cadbury said.

It'simportant to note that Space Race is not an exact account of how post-World War2 events spiraled into a competition to reach for the Moon. Rather, themini-series uses its central characters as devices to explain personalmotivations - von Braun's enthusiasm for space exploration, for example - whileremaining true to the overall timeline of events. The mini-series also reliesheavily on narration, recreation and character exposition to relate thetechnical challenges of human spaceflight.

"You alwaysworry about oversimplification," Cadbury said, adding explaining the evolutionof rocketry and astronautics accurately and simply was one of the "Space Race"project's main challenges.

"SpaceRace" stops just as the U.S. reachesthe Moon and the Soviet Union - bogged down by multiple failures if its N-1rocket - bows out of the lunar competition. Concluding there isunfortunate, given that the amount of space cooperation that later followedbetween the two world superpowers.

The joint Apollo-Soyuzproject in 1975 brought the two former enemies together in space for the firsttime during an unprecedented orbital docking.

Russiacontinues to be a powerfulally for NASA in the InternationalSpace Station project, a partnership that also includes the European SpaceAgency and a number of other participating nations.

"It'swonderful to see the two countries collaborating in this venture," Cadburysaid. "You kind of feel that this can only be to the human good."