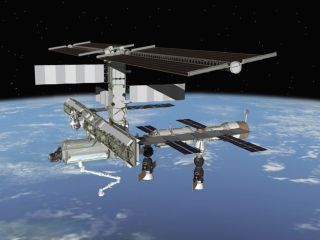 A docking port at the aft of the International Space Station's Zvezda service module (far right in this depiction) is now clear after the undocking of a Russian-built Progress 19 cargo ship on March 3, 2006. The Progress 20 cargo tug (docked at Pirs compartment at mid-right) and Soyuz TMA-7 vehicle (center at Zarya module) are also shown.
(Image: © NASA/JSC.)

"Thiscontract I expect to sign before the end of the year," Suffredini said in ateleconference with reporters. "The whole discussion of the six-person crew, now that we've got the[assembly] sequence in place, became our priority."

Two additional "contingency missions" padding NASA's shuttle manifest, aimed at delivering spares and other logistics to the space station, will likely not be needed, Suffredini said.

"Today I would tell you that I have a pretty high degree of confidence that we may not need this flights," he said, adding that they could be performed should they become necessary in the future.

ISS crews,once set at three astronauts per mission pending its construction, have beenlimited to two-person teams following the drop in NASA shuttle visits after the2003 Columbia accident. Theshuttle Discovery returned to the ISS in July 2005 during NASA's STS-114 return to flight mission.

A secondtest flight, STS-121also aboard Discovery, is slatedto launch no earlier than May 10, NASA officials have said. That flight, commandedby astronaut veteran StevenLindsey, is expected to return the ISS to a three-person crew when itferries European astronaut ThomasReiter to the orbital complex.

The nextshuttle flight dedicated to ISS assembly, STS-115 carrying a new truss segmentand solar arrays to the station, is slated to launch aboard the Atlantisorbiter no earlier than Aug. 28. However, the next Russian-built Soyuz vehicleto ferry humans to the ISS is scheduled to launch spaceward on March 29 ESTwith the station's Expedition13 crew.

Russia'sSoyuz and Progress spacecraft have proved a vital lifeline for the ISS, ensuringnew crews and supplies reached the station as NASA recovered from the Columbiaaccident. During that time, about two Soyuz vehicles ferried astronauts to theISS each year, with four Progress vehicles arriving with supplies.

"Prior toColumbia, we rotated almost all the crews with the shuttle," Suffredini said.

But thelarger, six-person expeditions will likely be a mix, with at least one U.S. orNASA partner astronaut riding shuttles into orbit while other station membersarrive by Soyuz, he said, adding that flight schedules, the number of Russianvehicles needed and rotation details still remain to be determined.

Suffredinisaid that only two future ISS-bound Soyuz flights will not have a U.S. seatavailable, and that not every shuttle to the station will carry a newcrewmember.

"We'llrotate about one person on the average on a shuttle, and we won't rotate onevery shuttle," Suffredini said. "We'll rotate as we need to to make the crews lineup right."