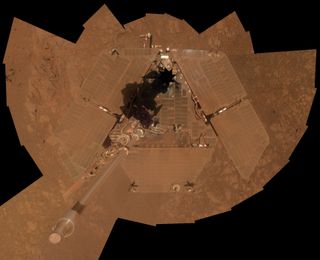 NASA's Mars Exploration Rover Opportunity recorded the component images for this self-portrait about three weeks before completing a decade of work on Mars. The rover's panoramic camera (Pancam) took the images between Jan. 3 and Jan. 6, 2014.
(Image: © NASA/JPL-Caltech/Cornell Univ./Arizona State Univ.)

The golf-cart-size Opportunity rover landed on the night of Jan. 24, 2004, three weeks after its twin, Spirit. Though both robots were originally tasked with 90-day missions, Spirit explored the Red Planet until 2010 and Opportunity keeps rolling along to this day, gathering more and more clues about Mars' warmer and wetter past.

Still, Opportunity's continued productivity at such an advanced age has surprised the mission team.

"I never expected this to happen, but it's so much fun," Arvidson told SPACE.com. "It's important science, and it's exploration and discovery. I'm having the time of my life."

Searching for signs of water

NASA dispatched Spirit and Opportunity to search for signs of past water activity on Mars, whose surface is very cold and dry today.

Both rovers found plenty of such evidence at their disparate landing sites. In 2007, for example, Spirit unearthed deposits of pure silica when its crippled right front wheel dug a furrow in the red dirt. Since silica forms when hot water reacts with rocks, the area likely once had two key ingredients necessary for life as we know it — liquid water and an energy source.

And Opportunity has made its share of big discoveries as well, some of them coming quite recently. On Thursday, for instance, mission scientists announced that the rover had found evidence of a potentially life-supporting environment in four-billion-year-old rocks on the rim of Endeavour Crater, which Opportunity has been exploring since August 2011.

"If I were there back when this material was being emplaced and altered, and I had my summer house, this is where I would drill to get good drinking water," Arvidson said during Thursday's press conference. "The older you look, the better it gets in terms of habitability at this location."

Spirit and Opportunity's finds helped pave the way for NASA's 1-ton Curiosity rover, which landed inside Mars' huge Gale Crater in August 2012 to determine if the Red Planet could ever have supported microbial life.

Curiosity found a potentially habitable lake system that dates from around 3.7 billion years ago. So it's possible that microbial life could have survived on the surface of ancient Mars for hundreds of millions of years, though perhaps not continuously in time and space during that stretch, researchers said. [10 Biggest Mars Discoveries by Spirit & Opportunity: A Scientist's View]

NASA's baseline mission requirements called for the solar-powered Spirit and Opportunity to drive about 0.6 miles (1 kilometer). But both rovers shattered that ceiling, just as they made a mockery of the 90-day lifespan. Spirit logged 4.8 miles (7.7 km) during its operational life, while Opportunity's odometer reads 24.07 miles (38.73 km) and counting.

In fact, Opportunity holds the American distance record for off-planet driving and is creeping up on the overall champ, the Soviet Union's remote-controlled Lunokhod 2 rover, which racked up 26 miles (42 km) on the moon in 1973.

So how have Spirit and Opportunity managed to keep performing so long after their warranties expired? While the high-quality design and construction cited by Arvidson is a major factor, as is the skill of the rover team, good fortune has also played a role, mission officials said.

For example, the rovers' handlers did not expect Martian breezes to blow dust off the robots' solar panels on a somewhat regular basis, which has happened throughout the pair's time on the Red Planet.

"This has been a tremendous benefit, this periodic cleaning," Spirit and Opportunity project manager John Callas, of NASA's Jet Propulsion Laboratory in Pasadena, Calif., told reporters Thursday. "We can't predict it — it seems to have some seasonal relationship — but it certainly has enabled the rovers to continue to generate power."

While Opportunity is showing some signs of its advanced age, such as an arthritic robotic arm, the rover remains in good health, Callas added.

The six-wheeled robot continues to study Martian rocks, with its current focus on a strange stone that suddenly appeared in Opportunity's line of sight recently. Mission scientists think Opportunity likely knocked this rock, which looks like a jelly donut, free of the substrate while turning around. The rock appears to have landed upside-down, affording a rare chance to examine material that has not been exposed to the Martian air for a long time — perhaps billions of years.

This sort of serendipity and opportunism is a hallmark of the discovery-driven mission, team members say.

"It's just a wonderful experience," Arvidson told SPACE.com. "Each time we move, we find something new."

Spirit and Opportunity are leaving an impressive legacy of science and exploration, helping researchers flesh out their understanding of the Red Planet and paving the way for ambitious future missions, NASA officials said.

"By standing on the solar panels of Spirit and Opportunity, we see the future of Mars exploration that has progressed to the point of looking for biosignatures, the ability to cache samples for sample-return, and planning for future human [missions] to Mars," said Michael Meyer, lead scientist for NASA's Mars Exploration Program.

But the twin rovers have also contributed in other, less tangible ways that touch all of humanity, Callas said.

"Over the past decade, through these rovers, our species has gone to work on Mars," he said. "In addition to being earthlings, because of these rovers, we have become Martians, too — dual citizens, if you will. We now live in a larger world, a world that extends beyond our own home planet. These rovers have made Mars our neighborhood and our backyard, and this is something truly remarkable."