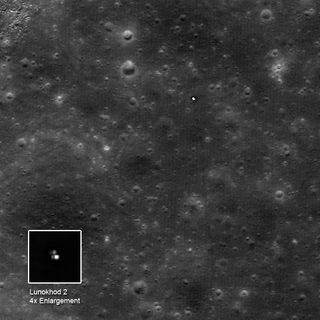 Image of the Soviet Union's Lunokhod 2 moon rover taken by NASA's Lunar Reconnaissance Orbiter, with the rover's tracks tracing its route southward. The enlargement is specially stretched to show the form of the rover; the brighest area may be the open clamshell lid.
(Image: © NASA/GSFC/Arizona State University)

A 1970s Soviet rover did indeed travel about 3 miles farther on the surface of the moon than originally thought, meaning that any robot hoping to break its off-world distance record will have to run a full marathon, researchers say.

The remote-controlled Lunokhod 2 moon rover was long thought to have traveled 23 miles (37 kilometers) on the lunar surface back in 1973. But a Russian team recently upped the estimate to 26 miles (42 kilometers), using images snapped by NASA's sharp-eyed Lunar Reconnaissance Orbiter.

The Russian researchers, led by Irina Karachevtseva of the Moscow State University of Geodesy and Cartography, have been presenting the new number at conferences for the past year or so. But the revision began attracting widespread attention only in the last month, as NASA's Opportunity Mars rover crept closer and closer to the old 23-mile mark. [Distances Driven on Other Worlds (Infographic)]

Now a second group of scientists — who are affiliated with the Lunar Reconnaissance Orbiter Camera (LROC) instrument suite — has backed the Russian team's finding, also using LROC images of Lunokhod 2's tracks to come up with an independent estimate around 26 miles.

"I think it's 41.5 [kilometers] or something like that, but we're not done yet," LROC principal investigator Mark Robinson, of Arizona State University, told SPACE.com on Monday (July 8). "We'll actually have a featured image fairly soon on the LROC web page that gives that number."

The LROC team is conducting its analysis as a simple double-check, not because it doubts the number derived by Karachevtseva and her colleagues, Robinson said.

"There isn't really a controversy here," he said. "We can measure the exact distance traveled by the rover now that we've got these pictures."

The LROC images, which boast a resolution of 1.6 feet (0.5 meters) per pixel, were unavailable back in Lunokhod 2's day, of course. The Lunar Reconnaissance Orbiter launched in 2009, 36 years after the old Soviet rover rolled to its final stop on the moon.

The original estimate of 23 miles appears to be based on the distance between Lunokhod 2's start and end points, Robinson said. But LROC photos show that the robot backtracked several times and also occasionally traveled in circles in order to take panoramic photos, adding several miles to its total odometry.

So Opportunity has a ways to go before it can be crowned the off-world driving champ. As of Wednesday (July 10), the rover had traveled 23.35 miles (37.58 km) since touching down on Mars in January 2004 along with its twin, Spirit, to hunt for evidence of past water activity.

And Opportunity will soon be hunkering down in a location called Solander Point to wait out the harsh Red Planet winter, so Lunokhod 2's record is likely safe for a while yet.

But pitting the Opportunity rover against Lunokhod 2 doesn't make much sense to Robinson. After all, the two robots are very different beasts that explored different worlds decades apart. And Lunokhod 2 covered all that ground in less than five months, he noted, while Opportunity has been chugging along for more than nine years.

Robinson wishes people would stop fixating on the distance record and take a little time to appreciate what both rovers managed to achieve on their separate missions.

"They've both accomplished amazing things, so focusing on who drove the farthest is really not useful," Robinson said.