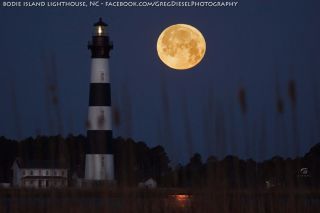 Astrophotographer Greg Diesel Walck sent in a photo of the full moon setting by the Bodie Island Lighthouse, Outer Banks, NC, taken March 27, 2013. He writes: "I have been trying to get a shot like this for almost a year. The weather and timing of the full moonset and dawn provided perfect condtions. I arrived at 6am and walked about 15 minutes into a knee deep marsh that was freezing cold. Set up my tripod and took over 500 images to get this composition."
(Image: © Greg Diesel Walck)

The first full moon of 2014 rises this week, but despite being the first of the year, it has the surprising name "Old Moon" for some cultures, but it's not the only lunar nickname for the event.

Full moon names date back to Native Americans, of what is now the northern and eastern United States. Those tribes of a few hundred years ago kept track of the seasons by giving distinctive names to each recurring full moon. Their names were applied to the entire month in which each occurred.

There were some variations in the moon names, but in general the same ones were current throughout the Algonquin tribes from New England on west to Lake Superior. European settlers followed their own customs and created some of their own names. Since the lunar ("synodic") month is roughly 29.5 days in length on average, the dates of the full moon shift from year to year. [The Moon: 10 Surprising Facts]

Here is a listing of all of the full moon names, as well as the dates and times for 2014. Unless otherwise noted, all times are for the Eastern Time Zone:

Jan. 15, 11:52 p.m. EST: Full Wolf Moon —Amid the zero cold and deep snows of midwinter, the wolf packs howled hungrily outside Indian villages. It was also known as the Old Moon or the Moon after Yule.  In some tribes this was the Full Snow Moon; most applied that name to the next moon. Since the moon arrives at apogee — its farthest point from Earth — less than three hours earlier, this will also be the smallest full moon of 2014. In terms of apparent size, it will appear 12.2-percent smaller than the full moon of Aug.10, the biggest full moon of the year.

Feb. 14, 6:53 p.m. EST: Full Snow Moon —Usually the heaviest snows fall in this month.  Hunting becomes very difficult, and hence to some tribes this was the Full Hunger Moon. [Phases of the Moon Explained (Infographic)]

Mar. 16, 1:08 p.m. EDT: Full Worm Moon —In this month the ground softens and the earthworm casts reappear, inviting the return of the robins. The more northern tribes knew this as the Full Crow Moon, when the cawing of crows signals the end of winter, or the Full Crust Moon because the snow cover becomes crusted from thawing by day and freezing at night. TheFull Sap Moon, marking the time of tapping maple trees, is another variation.

Apr. 15, 3:42 a.m. EDT: Full Pink Moon —The grass pink or wild ground phlox is one of the earliest widespread flowers of the spring.  Other names were the Full Sprouting Grass Moon, the Egg Moon, and —among coastal tribes —the Full Fish Moon, when the shad come upstream to spawn. In 2014 this is also the Paschal Full Moon; the first full moon of the spring season.

The first Sunday following the Paschal Moon is Easter Sunday, which indeed will be observed five days later on Sunday, April 20. This full moon will also undergo a total lunar eclipse and North America will have a ringside seat for it, as it will occur between midnight and dawn depending on your location. Totality will last almost 78 minutes. [Amazing Photos of a Total Lunar Eclipse]

May 14, 3:16 p.m. EDT: Full Flower Moon —Flowers are now abundant everywhere. It was also known as the Full Corn Planting Moon or the Milk Moon.

Jul. 12, 7:25 a.m. EDT: Full Buck Moon —This lunar moniker stems from the fact that this season is typically when the new antlers of buck deer push out from their foreheads in coatings of velvety fur. It was also often called the Full Thunder Moon, thunderstorms being now most frequent.  Sometimes it's also called the Full Hay Moon.

Aug. 10, 2:09 p.m. EDT: Full Sturgeon Moon —This month is when this large fish of the Great Lakes and other major bodies of water like Lake Champlain is most readily caught. A few tribes knew it as the Full Red Moon because when the moon rises it looks reddish through sultry haze, or the Green Corn Moon or Grain Moon.The moon will also arrive at perigee — its closest approach to Earth — only nine minutes earlier at 2:00 p.m. ED,T at a distance of 221,765 miles (356,896 km.) from Earth. So this is the biggest full moon of 2014.

Very high ocean tides can be expected during the next two or three days, thanks to the coincidence of perigee with Full Moon. The occurrence of this full moon on this particular date is rather poor timing for those who enjoy the annual performance of the Perseid meteor shower; this display will peak less than 2½ days later and the brilliant light of the nearly full moon will likely wash out all but the very brightest of these swift streaks of light.

Sep. 8, 9:38 p.m. EDT: Full Harvest Moon —Traditionally, this designation goes to the Full Moon that occurs closest to the Autumnal (fall) Equinox. This year’s version comes unusually early. At the peak of the harvest, farmers can work into the night by the light of this moon. Usually the moon rises an average of 50 minutes later each night, but for the few nights around the Harvest Moon, the moon seems to rise at nearly the same time each night: just 25 to 30 minutes later across the U.S., and only 10 to 20 minutes later for much of Canada and Europe. Corn, pumpkins, squash, beans, and wild rice —the chief Indian staples —are now ready for gathering.

Oct. 8, 6:51 a.m. EDT: Full Hunters' Moon —With the leaves falling and the deer fattened, it's now time to hunt. Since the fields have been reaped, hunters can ride over the stubble, and can more easily see the fox, as well as other animals, which can be caught for a thanksgiving banquet after the harvest. The year's second total lunar eclipse occurs with this full moon; visible in its entirety over western North America, while for the central and eastern sections, moonset will intervene during the later part of the umbral stages. Totality lasts almost 59 minutes. [How Lunar Eclipses Work (Infographic)]

Nov. 6, 5:23 p.m. EST: Full Beaver Moon —At this point of the year, it's time to set beaver traps before the swamps freeze to ensure a supply of warm winter furs. Another interpretation suggests that the name Beaver Full Moon come from the fact that the beavers are now active in their preparation for winter.  It's also called the Frosty Moon.

Dec. 6, 5:23 p.m. EST: Full Cold Moon: On occasion, this moon was also called the Moon before Yule. December is also the month the winter cold fastens its grip. Sometimes this moon is referred to as the Full Long Nights Moon and the term "Long Night" Moon is a very appropriate name because the nights are now indeed long and the moon is above the horizon a long time. This particular full moon makes its highest arc across the sky because it's diametrically opposite to the low sun.

Editor's note: If you snap an amazing photo of the moon, or any other night sky view, and you'd like to share for a possible story or image gallery, please contact managing editor Tariq Malik at spacephotos@space.com.