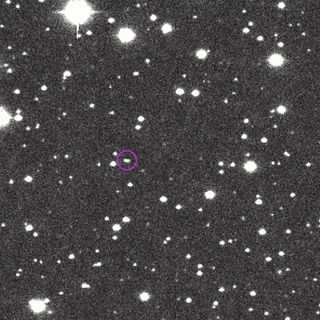 This still from an animated GIF shows Asteroid 2014 AA, discovered by the NASA-sponsored Catalina Sky Survey on Jan. 1, 2014, as it moved across the sky
(Image: © CSS/LPL/UA)

Astronomers have spotted the first new asteroid of 2014 — a car-size space rock that apparently slammed harmlessly into Earth's atmosphere just after the New Year began.

"The most likely impact location of the object was just off the coast of West Africa at about 6 p.m. PST (9 p.m. EST) Jan. 1," NASA officials wrote in a press release Thursday.

"Asteroid 2008 TC3 is the only other example of an object discovered just prior to hitting Earth," NASA officials wrote. "So far, there have been a few weak signals collected from infrasound stations in that region of the world that are being analyzed to see if they could be correlated to the atmospheric entry of 2014 AA."

Scientists have discovered more than 10,000 near-Earth asteroids such as 2014 AA to date. However, they've only just scratched the surface of the total population of these space rocks, which is thought to number in the millions. And some of them are big enough to cause extensive damage should they slam into our planet.

In February 2013, for example, a previously unknown space rock roughly 62 feet (19 m) wide exploded above Chelyabinsk, Russia, injuring more than 1,200 people. The Russian meteor explosion occurred on the same day that a 100-foot-wide (30 m) asteroid, known as 2012 DA14, missed Earth by just 17,200 miles (27,700 kilometers), coming closer than many of the communications satellites that circle our planet.