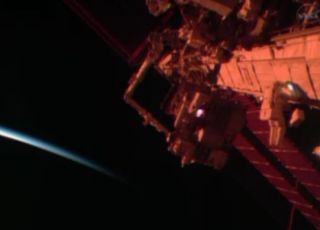 Two American astronauts are spending Christmas Eve working in the vacuum of space to hopefully fix the vital cooling system aboard the International Space Station.

NASA astronauts Mike Hopkins and Rick Mastracchio officially started the spacewalk at 6:53 a.m. EST (1153 GMT). The two astronauts ventured outside of the space station's Quest airlock shortly afterwards, getting to work on their second spacewalk in four days. You can watch the spacewalk live on SPACE.com today (Dec. 24) via NASA TV.

"In this holiday way of giving, we're giving you a spacewalk today," NASA spokesman Rob Navias said during NASA TV's coverage of the spacewalk. Today's spacewalk is the second-ever Christmas Eve EVA (extra-vehicular activity, another term for spacewalk). The first took place 14 years ago as space shuttle Discovery astronauts Steve Smith and John Grunsfeld spent 8 hours and 8 minutes installing upgrades and new insulation on the Hubble Space Telescope. [See Photos from the Spacewalks to Fix the Station's Vital Cooling System]

During today's 6.5-hour spacewalk, Hopkins and Mastracchio will work to replace a faulty pump module that helps cool equipment inside and outside of the space laboratory. Since part of the pump failed on Dec. 11, non-critical systems and science experiments in two of the station's laboratories have been shut down.

NASA officials have said the six astronauts currently living inside the space station are not in any immediate danger, but the series of spacewalks is necessary to get the orbiting outpost back to normal.

On Dec. 21, Hopkins and Mastracchio performed the first urgent spacewalk in which they successfully removed the failed refrigerator-size pump module and stored it on a nearby platform ahead of schedule. During today's walk, the astronauts will install a replacement pump module stored on the station's exterior.

If the astronauts' work goes as planned, NASA officials said a third spacewalk probably won't be necessary, and the two astronauts will have a quiet Christmas Day.

Tuesday's spacewalk — the eighth for Mastracchio and the second for Hopkins — was originally scheduled for Monday (Dec. 23), but it was delayed because of a problem with Mastracchio's spacesuit. According to NASA, a small amount of water entered the suit's cooling system during the repressurization of the airlock on Saturday after the first spacewalk ended.

Mastracchio is wearing a different spacesuit for Tuesday's extra-vehicular activity. Space agency officials say the issue is unrelated to the leak that flooded Italian astronaut Luca Parmitano's spacesuit during a spacewalk in July.

Because of the quickly planned spacewalks, the first official cargo mission of Orbital Sciences' Cygnus spacecraft had to be postponed. The unmanned freighter, packed with science experiments and supplies, was set to launch to the International Space Station on Dec. 19 from the Mid-Atlantic Regional Spaceport at the NASA Wallops Flight Facility in Virginia. Now NASA officials said that liftoff will not occur before Jan. 7, 2014.

Hopkins and Mastracchio's spacewalk will also be the 176th spacewalk overall in support of the assembly and maintenance of the $100 billion International Space Station, which has been continuously inhabited by rotating crews of astronauts since 2000.