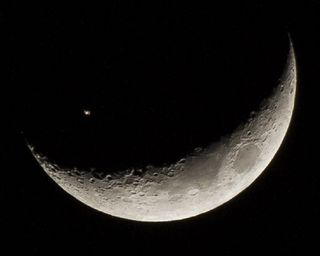 The International Space Station can be seen cruising in front of a crescent moon in this stunning night sky photo recently sent to SPACE.com.

Juan Gonzalez-Alicea of Sociedad de Astronomia del Caribe captured the image from western Puerto Rico on Dec. 6 using a Canon 7D with a 300 mm lens. "I was able to capture the ISS [International Space Station] passing in front of the moon,” Gonzalez-Alicea wrote SPACE.com. "It was an amazing sight since Venus was at maximum brightness below the crescent moon.”

Venus was at its greatest brilliance on the evening of Friday, Dec. 6, but the planet will be at its maximum brightness all month. It remains highest in the sky the first half of December, descending back down toward the horizon the second half of the month. [Spectacular Night Sky Photos by Stargazers: December 2013 (Gallery)]