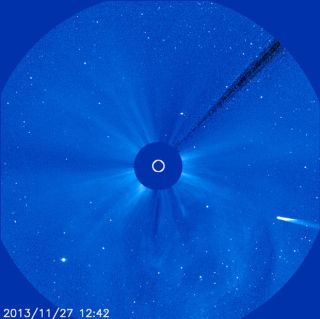 This view of Comet ISON was captured by the SOHO space observatory on Nov. 27, 2013, one day ahead of the comet's closest approach to the sun.
(Image: © NASA/SOHO)

Editor's Update: Comet ISON may have survived its fiery trip around the sun. For the latest news on the comet, read: Comet ISON Gets Roasted by Sun and Vanishes, But Did It Survive?

Astronomers all over the world are training their eyes and telescopes on Comet ISON as it approaches its closest distance to the sun on Thursday (Nov. 28), with several unblinking space telescopes offering live views of the comet's solar encounter.

Comet ISON's closest approach to the sun, called perihelion, will occur Thursday at 1:44 p.m. EST (1844 GMT), just in time for the Thanksgiving Day in the United States. But rather than the traditional football game, we’d suggest you watch ISON's progress around the sun instead.

While some predictions suggest that the comet may be visible in daylight, we’d rather you didn’t risk your vision by staring at the sun. It might be possible to block the sun from view with a well-placed chimney or lamp post, but there is a better way, and it's 100-percent safe: watch live views from space. [Comet ISON's Sun Encounter: Complete Coverage]

There are several satellites in orbit around the sun which are trained on the sun all the time. One the oldest and still one of the best is SOHO, the Solar and Heliospheric Observatory.

You can see the latest video of Comet ISON from SOHO here.

The sun-watching SOHO spacecraft is a joint mission by NASA and the European Space Agency. It launched in 1995 and carries an array of cameras pointed at the sun. You can see live views from the SOHO spacecraft here: http://sohowww.nascom.nasa.gov/home.html

For purposes of seeing Comet ISON, the most interesting SOHO instrument is the Large Angle and Spectrometric Coronagraph #3, or LASCO C3 for short. This shows a field of view about 32 degrees wide. The sun itself is blocked by a disk at the end of a stalk, its diameter marked by a small white circle.

Because SOHO is in space, there is no atmosphere to scatter the sun's light, so viewers can see the stars surrounding the sun, just as if we were watching a totalsolar eclipse. Actually, the view is much better than at a total eclipse, with stars down to about 7th magnitude visible — slightly better than what the human eye can see.

Very early in SOHO’s history, astronomers realized that they could observe comets passing very close to the sun, called “sungrazers.” To date, more than 2,400 comets have been discovered by careful skywatchers scanning SOHO’s LASCO C3 images. The images from LASCO are refreshed regularly and can be seen here.

Whenever you check this page, you will see the most recent image from space, usually not more than an hour or two old. Go there right now, and you will see the sun’s current coronal activity and, in the background, the stars on the far side of the sun.

Over the next few days, if all goes well, you will see Comet ISON’s progress around the sun. It should enter LASCO C3’s field of view at the right side on Tuesday November 26.

Comet ISON will pass just below the sun on Thursday and then move upwards, leaving the field on Saturday afternoon. In our graphic, the yellow circle shows the LASCO C3 field of view, the gray parabola is ISON’s path, and the stars of Scorpius are in the background. ISON is shown in its position on Wednesday November 27.

It’s impossible to say in advance exactly what we will see in the next few days. By watching the comet's progress in the LASCO camera, you will participate in a great astronomical adventure.

Will the comet break up? Will it continue on to be one of the brightest comets in history? As of this writing, no one knows, but by watching it on LASCO, you will know as soon as anyone.

NASA will hold a live Google Hangout from 1 p.m. to 3:30 p.m. EST (1800 to 2030 GMT) to stream views of the comet during its closest approach to the sun. You can watch the Comet ISON hangout live on SPACE.com here.