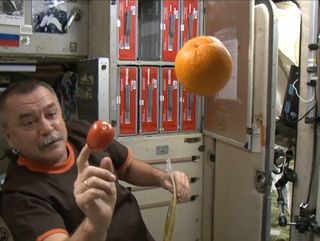 For American astronauts in space, the lack of gravity is no reason to miss a turkey dinner on Thanksgiving.

On Thursday (Nov. 28), while Americans across the United States chow down on turkey, cranberries, pumpkin pie and other dishes in honor of Thanksgiving Day holiday, Americans in space will be sure to do the same.

The six crewmembers on the International Space Station will eat a traditional Thanksgiving dinner as they sail 260 miles (418 kilometers) above the Earth. On the menu are freeze-dried green beans, thermostabilized yams and other dishes prepared to give the astronauts a little taste of home. [Space Food Photos: What Astronauts Eat in Orbit]

"We now have about 200 different foods and beverages that are part of our baseline food system for the International Space Station," NASA food scientist Vickie Kloeris said today (Nov. 27) during a video interview with SPACE.com. "Included in those are a variety of traditional type Thanksgiving items.

"For instance, we have sliced turkey that is thermostabilized — it's in a pouch so they warm it up and cut the pouch open and eat out of the pouch with a fork," Kloeris said. "We also have some of the traditional side dishes. We have cornbread dressing freeze-dried — they add water on orbit. We have mashed potatoes — no gravy, unfortunately."

NASA astronauts Mike Hopkins and Rick Mastracchio on the station won't get a full day off for the holiday, but they will get a little free time. Mastracchio and Hopkins will do some work on science experiments and also try to spot the potentially brilliant Comet ISON as it makes its close pass with the sun tomorrow.

"People often ask us what it's like to be onboard ISS [International Space Station] for the holidays," Hopkins said in a Thanksgiving video beamed down from the station. "Though we miss our families, it's great to be in space. As astronauts, this is what we train for and this is where we want to be."

Hopkins and Mastracchio have a host of options to choose from for their holiday meal — including NASA's cornbread dressing — but that wasn't always the case. Before astronauts began their long-duration stays on the space station, food options were much more limited, according to Kloeris.

"I've been working with space food about 28 years," Kloeris said. "Preservation methods that we've used over the years haven't changed all that much, but the variety has grown a bunch over that time because we've gone from short duration shuttle flights to six month stays on the International Space Station. The amount of variety that we have to provide for a six-month stay is much greater than for a week or two on the shuttle."