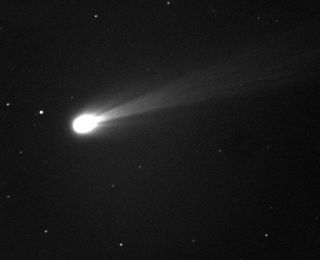 Comet ISON shines brightly in this image taken on the morning of Nov. 19, 2013. This is a 10-second exposure taken with the Marshall Space Flight Center 20" telescope in New Mexico. The camera there is black and white, but the smaller field of view allows for a better "zoom in" on the comet's coma, which is essentially the head of the comet.
(Image: © NASA/MSFC/MEO/Cameron McCarty)

The potentially dazzling Comet ISON is currently visible to the unaided eye — a milestone for the comet's much-anticipated pass through the inner solar system — but its future all depends in how it reacts to a close Thanksgiving encounter with the sun, comet observers say.

Comet ISON can be seen low in the southeastern sky an hour before dawn, weather permitting,  but it is en route for an extremelyclose flyby of the sun on Thanksgiving Day (Nov. 28). Will it break apart due to the sun's gravity and heat, or will the comet emerge victorious from its solar rendezvous and shine bright in the night sky? No one knows for sure yet, said Alan MacRobert, senior editor for Sky & Telescope magazine, in a skywatching guide this week.

"We might witness a nice, long-tailed comet visible to the naked eye that will leave millions of people with fond memories for a lifetime," MacRobert said. "Or maybe it will be a small comet for sky hunters using binoculars and a good map of its position. Or it might yet break up and vanish." [How to See Comet ISON: An Observer's Guide]

Comet ISON's nucleus, or core, will have to survive its closest encounter with the sun on Nov. 28 around 2 p.m. EST. (1900 GMT) Surface temperatures are expected to peak at 2,700 degrees Fahrenheit (4,900 degrees Celsius). That's hot enough to melt iron, let alone the ices that make up the comet's core.

There are also worries among skywatchers that the rapid rotation of Comet ISON's nucleus, a mere 10 hours, could put the comet in danger of disintegrating as it contends with the strong tidal forces from its brush with the sun's intense gravity.

If the comet does break apart, however, Sky & Telescope experts said the view could still be "glorious." With more pieces exposed to the sun, the brightness of the fragments could still put on a good show.

To catch a glimpse of ISON, the magazine recommends using binoculars as the comet is harder to spot with your bare eyes unless you know exactly where to look. Comet seekers should find a dark spot with an unobstructed view of the east-southeast horizon. Go out at least an hour before dawn and look for a fuzzy blob nearby the bright planets Saturn and Mercury, and naked eye star Spica.