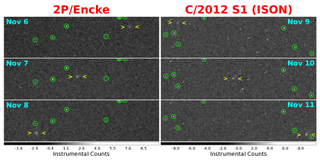 A NASA spacecraft orbiting Mercury will have a ringside seat when two comets zip by the tiny planet on Monday and Tuesday (Nov. 18 and 19).

MESSENGER is well equipped to study the composition of the icy wanderers, which should be shedding material like mad at this point, Vervack said. [Comet ISON: 8 Essential Facts]

"We hope to obtain the first definitive detections of X-ray emissions from silicon, magnesium and aluminum," he said. "If you think of a comet as a dirty snowball, these are elements that make up the dirt. Close to the sun is where we expect the dirt to be vaporized."

All eyes are on Comet ISON as it barrels toward a risky Thanksgiving passage by the sun Nov. 28. Some astronomers say it could be ripped apartas it approaches within 724,000 miles (1.16 million kilometers) of the solar surface.

"MESSENGER's glimpse of Comet ISON as it plunges inward could give astronomers the data they need to predict the comet’s fate," NASA stated of ISON's close approach on Tuesday, which will bring the comet within 0.24 astronomical units of Mercury. (One astronomical unit is the distance from Earth to the sun — about 93 million miles, or 150 million km.)

Comet Encke — which passes by Mercury's orbit once every 3.3 years — has put on a show for NASA spacecraft in the past. In 2007, the twin STEREO spacecraft (which usually gaze at the sun) watched a solar storm tear apart Encke's tail, which then grew back again.

Encke also happens to be the origin of the Taurid meteor shower, which occurs in November and just passed its peak a few weeks ago. The comet will get within 0.025 AU of Mercury on Monday.

NASA plans to release images from the flybys a few days after they occur.

Editor's note: If you snap an amazing picture of Comet ISON, Comet Encke or any other night sky view that you'd like to share for a possible story or image gallery, send photos, comments and your name and location to managing editor Tariq Malik at spacephotos@space.com.