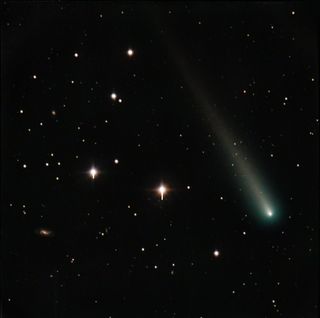 Scott Ferguson captured this image of Comet ISON on Oct. 27 while at a friend's private observatory, Northwest Florida Observatory. He used a 20" Meade LX400-ACF Max Mount and Televue NP101 to capture the photo, which was sent to SPACE.com on Oct. 30.
(Image: © Scott Ferguson)

Faraway galaxies surround the potentially dazzling Comet ISON as it streaks toward the sun in this stunning photo recently submitted to SPACE.com by skywatcher Scott Ferguson.

Ferguson took the photo of Comet ISON on Oct. 27 while at Northwest Florida Observatory, a private facility run by a friend. He used a 20" Meade LX400-ACF Max Mount and Televue NP101 to capture the image.

"I used the 20" Meade to collect luminance images with an SBIG STL-1001e using short 60-second exposures so that I could capture both the comet and the background stars and galaxies without trailing either one," Ferguson wrote SPACE.com in an email. [See more amazing Comet ISON photos by stargazers]

Ferguson simultaneously used the Televue refractor to capture color data with an SBIG ST-4000XCM using 5-minute exposures. The images were then collected for one hour and stacked while they were aligned on the stars and then stacked again to align with ISON. He then overlaid the stacked images on top of each other and composited them to show both the comet and the background stars in detail.

The image also contains a number of very small and distant galaxies, as well as a couple of larger, more noticeable galaxies, including NGC 3428 and NGC 3429.

Comet ISON will make closest approach to the sun on Nov. 28, when it will come within a mere 730,000 miles (1.2 million kilometers) of the solar surface. If ISON survives this brush with our star, it could put on an impressive skywatching show December, experts say.

Two Russian amateur astronomers discovered Comet ISON in September 2012. The comet is believed to be making its maiden voyage to the inner solar system from the Oort Cloud, which is a distant and cold comet repository.