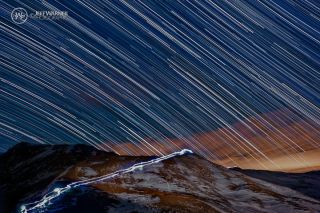 Colorado-based freelance photographer Jeff Warner took this time-lapse composite of the Milky Way over Loveland Pass, Colo., on Oct. 8, 2013. This photo features a trail of headlamps from three hikers as they descended a ridge on an annual “tribute hike” in honor of their friend who died in the line duty while serving as a U.S. Army Specialist in Tikrit, Iraq on Oct. 8, 2006. A total of 159, 30-second images—taken from 10:02 to 11:29 p.m.—were used to take the image.
(Image: © Jeff Warner | jeffwarnerphoto.com )

Headlamps on the ground on the Milky Way shine in an inspiring night sky photo taken by a a veteran stargazer.

The unplanned shot features a trail of headlamps from three hikers as they descended a ridge on an annual "tribute hike" in honor of their friend who died in the line duty while serving as a U.S. Army Specialist in Tikrit, Iraq on Oct. 8, 2006. A total of 159, 30-second images — taken from 10:02 to 11:29 p.m. — were used to take the image. [Amazing Night Sky Photos by Stargazers: November 2013 ]

"Since the aurora was not yet obvious enough to concentrate on, I started capturing random images of the Milky Way to the south, occasionally seeing the headlights poke up above the ridge line. I could hear them [the hikers] chatting and calling their dog, which at one point howled back at some coyotes off in the distance," Warner wrote on his website.

"Even though I knew the aurora was liable to be behind me to the north, I kept returning to the hikers on the ridge line, wondering what they could possibly be doing on this cool October night,” he added.

Warner also captured a stunning seven-image "stitch" of the Milky Way glowing over Loveland Pass. The faint, red glow of aurora borealis can also be seen to the right of the photo.

Made up of dust, gas and roughly 400 billion stars, the Milky Way Galaxy is a barred spiral galaxy stretching between 100,000 to 120,000 light-years in diameter. It is visible as a dazzling band of light in the night sky.