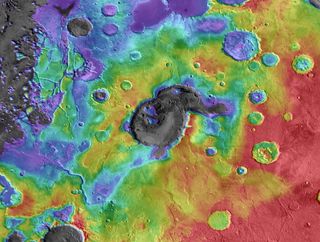 The surface of ancient Mars may have been rocked repeatedly by giant supervolcanoes, which unleashed colossal and explosive eruptions that forever changed the face of the Red Planet, scientists say.

By examining an extremely old part of Mars called the Arabia Terra region, scientists have found what could be the remnants of a supervolcano — the unofficial way to describe a huge, explosive volcano that produces more than about 240 cubic miles (1,000 cubic kilometers) of volcanic material when it erupts.

Dubbed the Eden Patera, the irregularly shaped crater has the hallmarks of an ancient supervolcano, a previously undocumented geological feature on Mars, said Joseph Michalski, a Mars researcher at the Planetary Science Institute in Tucson, Ariz., and London's Natural History Museum. [See a Video about the supervolcano found on Mars ]

"What we found is a new kind of volcanic complex which looks different from the other kinds of volcanoes that we know to exist on Mars," Michalski, the lead author of a new study being published in Nature this week, told SPACE.com. "We don't know the exact ages of these, but we think they're quite ancient. We think they occurred during the first billion years of the planet's history."

The supervolcano could help explain a mystery in Martian geology. Scientists suspected that fine-grained material deposited in the Arabia Terra region could have come from volcanic activity, but there was no evidence of volcanoes in the area.

Michalski's study suggests that the layers of material could have been deposited after the explosive eruption of Eden Patera — which scientists think erupted at least three times — or possibly other supervolcanoes.

Until now, Mars researchers may have just been looking for the wrong kind of volcano in the area. Instead of the dead cone-shaped shield volcanoes usually seen on the Martian surface, like Olympus Mons, the largest known volcano in the solar system, ancient supervolcanoes leave different evidence of their presence, Michalski said.

"These [Martian supervolcanoes] are very explosive, they don't build up big mountains of lava flows and they don't have the same topographic profiles," Michalski said. "Maybe we've been looking for the shield type all this time, and maybe for the most ancient history, we should be looking for the explosive type."

However, evidence of these explosive types of volcanoes is a little more difficult to uncover. A supervolcano remnant can almost seem to hide in plain sight, masquerading as an impact crater, but Michalski found a few key signs of the volcano's true identity.

Like an ancient impact crater, the circular, raised rim around the supervolcano feature has been worn away, but although old Martian craters and Eden Patera might look similar on the outside, they are markedly different on the inside.

"If these things were impact craters, then they have experienced a lot of erosion," Michalski said. "That means they should be shallow … but these things are very deep, actually. They have a depth, which is something more like a pristine crater, but a pristine crater has all that stuff preserved. So, it doesn't make sense; it doesn't add up … They just don't look like impact craters."

Michalski and his team used data from instruments aboard the Mars Global Surveyor spacecraft (which stopped operations in 2006), the Mars Odyssey orbiter, the Mars Reconnaissance Orbiter and others. But two rovers on Mars also might help the scientists bolster their claims.

The volcanoes in the Arabia Terra region might be responsible for the powdery deposits NASA's Mars Curiosity rover and the agency's Opportunity rover found in the Gale Crater and Meridiani Planum landing sites, respectively.

"I agree with the authors that if such [super]volcanoes have been widespread, disseminated and explosive, their findings are very important on the so-far-not-well-understood climate history and past habitability of Mars," Helmut Lammer, a senior scientist at the Space Research Institute at the Austrian Academy of Sciences who is not associated with the study, told SPACE.com in an email. "The importance in the study lies in the fact that our understanding on early Mars volcanism becomes better."

Although these results are exciting, Michalski hopes that other scientists will follow up on his work. "We suspect there very well may be more of them [supervolcanoes], but we just haven't been looking for them," Michalski said.