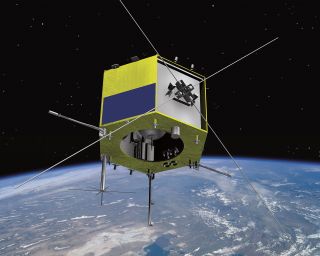 The CSA's Cascade Smallsat and Ionospheric Polar Explorer (CASSIOPE for short) will keep an eye on the effects of solar particles when they hit the Earth's atmosphere. If all goes well, the CASSIOPE space weather mission should bring a wealth of scientific data, the mission's backers say.

"The science team on CASSIOPE is very knowledgeable, experienced and reputable in this domain of science," Guennadi Kroupnik, the CSA's director of space utilization development, told SPACE.com. "However, experience with this space mission, we believe, will help to position the team and scientists even further in [the] international context." [The Sun's Wrath: Worst Solar Storms in History]

CASSIOPE is expected to launch to a low-Earth orbit Sept. 29 riding atop the first flight of the private spaceflight company SpaceX's next-generation Falcon 9 rocket. The rocket will launch from SpaceX's launch pad at Vandenberg Air Force Base in California, with the launch window opening at 12 p.m. EDT (1600 GMT). The satellite has a primary mission of 18 months; however, investigators hope to get five years of research completed before the satellite falls back through Earth's atmosphere.

On a satellite that is only a bit larger than an office desk — 4 feet by 6 feet (1.2 meters by 1.8 meters) — CASSIOPE carries eight scientific instruments. These tools will investigate what happens after particles and plasma from the solar wind interact with the Earth's atmosphere. The instrument suite is called ePOP, for Enhanced Polar Outflow Probe, and is led by the University of Calgary.

An instrument called the fast auroral imager will use two cameras (in the visual and near infrared) to examine the fine structure of auroras. An imaging and rapid-scanning spectrometer will simultaneously observe what kinds of charged particles, or ions, are in the atmosphere. Meanwhile, a superthermal electron imager will show how fast the electrons are moving and where they're going.

"It's a picture of what the plasma is doing around the spacecraft," Greg Enno, a technical manager for the scientific suite at the University of Calgary, told SPACE.com. Studying the small auroral structures — only a few dozen feet in size — will give an idea of how energy transfer takes place within the shimmering lights.

Other Canadian instruments on board include a radio receiver used to watch plasma waves and a flux gate magnetometer to study the magnetic field. A GPS experiment will accurately clock the time in which events occur as well as the orientation of the spacecraft. It will also measure electron content by watching other GPS satellites rise or set behind Earth. Then it will determine how the signals change as they skim through the atmosphere before being blocked by Earth itself.

CASSIOPE will also carry two international payloads. The Japanese Aerospace Exploration Agency (JAXA) has a neutral mass spectrometer that will examine how neutral particles behave relative to the surrounding ions and electrons. The U.S. Navy also provided a transmitter that will interact with several ground-based receivers, again to measure electron content in the atmosphere.

CASSIOPE is also a pioneer in another sense. On board will be Cascade, a technology demonstration communications payload that will showcase a "space-based digital courier service," according to information from Canadian company MacDonald, Dettwiler and Associates (MDA).

Cascade Data Services (a subsidiary of MDA) will use the communications payload to pick up large digital packets of information, anywhere from 50 to 500 gigabytes at once. Then Cascade will beam the data down to interested customers when the satellite passes over a receiving station.

As part of a reimbursable contribution agreement between the space agency and MDA, the CSA will receive a percentage of Cascade's commercial revenues, as royalties, to repay the agency's contribution. It's the first time CSA has ever used such a government contribution mechanism, Kroupnik said.

"This does not mean we will replace contracts with contributions. It depends on the particular situation," said Kroupnik, adding that this mechanism would most likely be used in the future if "the government of Canada is not a direct beneficiary and user of the data and services."

The agency could use a similar contract arrangement for data services associated with the RadarSat Constellation Mission, a trio of satellites set to launch in 2018. The satellites will be used for matters such as surveillance and weather monitoring.

According to the Canadian Space Agency, a launch webcast for the CASSIOPE mission may be provided by SpaceX. If possible, SPACE.com will carry the webcast live. You can also follow the first space launch of SpaceX's Falcon 9 rocket from Vandenberg through SPACE.com partner Spaceflight Now's Mission Status Center.