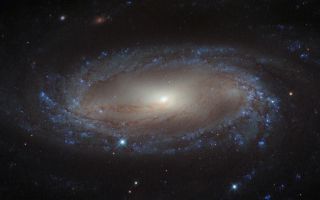 Lying more than 110 million light-years away from Earth in the constellation of Antlia (The Air Pump) is the spiral galaxy IC 2560, shown here in this stunning space wallpaper from NASA/ESA Hubble Space Telescope.
(Image: © ESA/Hubble & NASA; Acknowledgement: Nick Rose)

Lying more than 110 million light-years away from Earth in the constellation of Antlia (The Air Pump) is the spiral galaxy IC 2560, shown here in this stunning space wallpaper from NASA/ESA Hubble Space Telescope. At this distance it is a relatively nearby spiral galaxy, and is part of the Antlia cluster—a group of more than 200 galaxies held together by gravity. This cluster is unusual; unlike most other galaxy clusters, it appears to have no dominant galaxy within it. In this image, it is easy to spot IC 2560's spiral arms and barred structure. This spiral is what astronomers call a Seyfert-2 galaxy, a kind of spiral galaxy characterized by an extremely bright nucleus and very strong emission lines from certain elements — hydrogen, helium, nitrogen, and oxygen. The bright center of the galaxy is thought to be caused by the ejection of huge amounts of super-hot gas from the region around a central black hole. This image was released Sept. 2, 2013.