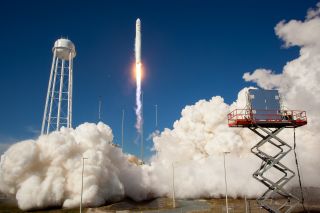 The third try was the charm for the private Antares rocket, which launched into space from a new pad at NASA's Wallops Flight Facility, its twin engines roaring to life at 5 p.m. EDT (2100 GMT) on April 21, 2013 to carry a mock cargo ship out over the Atlantic Ocean and into orbit. The successful liftoff came after two delays caused by a minor mechanical glitch and bad weather.
(Image: © NASA/Bill Ingalls)

NASA's Wallops Flight Facility, nestled on a quaint stretch of Virginia's rural coastline, has an active autumn launch schedule this year, one sign a nearly $150 million investment by state and federal governments is starting to pay off.

With four space missions planned for liftoff in a span of about three months, the Virginia spaceport is operating at a pace unmatched since the heady days of the Space Race in the 1960s.

According to its website, the NASA-owned facility has launched more than 14,000 rockets since it was established in 1945. But the bulk of those launches were of lightweight sounding rockets lofted on suborbital trajectories. [Amazing Rocket Launch Photos of 2013]

Only a few dozen of the launches put satellites in orbit.

For the first time since the 1970s, Wallops has a steady lineup of space launches over the next few years as Orbital Sciences Corp. begins flying resupply missions to the International Space Station.

The first of at least nine Antares rocket launches to the space station is scheduled for Wednesday at 10:50 a.m. EDT (1450 GMT). This week's launch will kick off a demonstration mission of Orbital's Cygnus cargo spacecraft, and eight operational flights will follow under a $1.9 billion contract with NASA.

On a pace of two or three resupply flights per year, the Cygnus manifest will keep Wallops and the Virginia Commercial Space Flight Authority, operator of the Wallops launch pads, busy for much of the decade.

"I have to say it looks pretty good, providing the missions continue to come," said Bill Wrobel, director of the Wallops Flight Facility.

An occasional launch of Orbital's smaller solid-fueled Minotaur rocket added to the mix makes for a sweet recipe for Dale Nash, executive director of the Virginia Commercial Space Flight Authority.

It's all helping put Virginia's Eastern Shore on the map as a space hub.

About a four-hour drive southeast of Washington, D.C., Wallops lies in a region known more for factory farming, the draw of the wild ponies of Chincoteague Island, and as a weekend getaway for landlocked Washingtonians seeking a summertime respite.

But rocket launches — and social media — are helping to change that.

When NASA's moon-bound LADEE mission blasted off in early September, its streak into space from Virginia lit up both the night sky and Twitter along the East Coast in a late-night launch visible from the homes of tens of millions of people from New England to North Carolina. [See Launch Photos of NASA's LADEE Mission]

The mission got a second boost on social media last week when a frog photobomb hit the interweb.

"Antares really puts us on the map in that we can support the International Space Station, and we can put up satellites in the 12,000-pound range," Nash said. "That's a significant step. That all came about from the state of Virginia, with congressional support from Maryland, getting the funding, the approval and the commitment to come in here."

Beginning with the Sept. 6 launch of NASA's LADEE lunar orbiter aboard a Minotaur 5 rocket, derived from decommissioned Peacekeeper missile stages, the busy stretch of launches continues with Wednesday's flight of an Antares booster on a test run to the space station.

A Minotaur 1 rocket, a smaller version of the Minotaur powered by Minuteman missile motors, is scheduled to blast off Nov. 4 with a cache of 29 satellites on a U.S. Defense Department mission.

The manifest calls for another Antares rocket launch in December on Orbital's first contracted resupply flight to the space station.

"We're really beginning to click on all cylinders," Nash said. "I think we'll not only be able to pull off these two launches within a couple of weeks of each other, but we will pull off two more before the end of the year."

The Virginia Commercial Space Flight Authority, a state agency of the Virginia government, runs two launch pads at the Mid-Atlantic Regional Spaceport, colloquially known as MARS. The infrastructure is on land leased by Virginia from NASA, which is in charge of range support, safety and rocket tracking systems.

MARS operates pads 0A and 0B lying about 1,500 feet (457 meters) apart on the sandy Atlantic coastline.

Launch pad 0A, the northernmost of the pads, was the first all-new launch pad built in the United States for a liquid-fueled rocket in more than 40 years. Virginia, Orbital Sciences and NASA divided the facility's cost.

"That was very challenging, but we're beginning to feel like we're hitting our stride," Nash said.

The Antares pad faced more than a year of construction delays as engineers struggled with the pad's liquid fueling systems, but Nash said the facility performed well in its first use during the April test launch of Orbital's Antares rocket. [Photos: Orbital Sciences' 1st Antares Rocket Test Flight]

"Even though it's only our second mission," Nash said, referring to Wednesday's Antares launch, "it really feels like we've done multiple. We did a fair amount of testing to begin with, we did have two scrubs before we launched with the maiden flight. It is so much easier getting the pad prepared and ready to take the rocket this time."

Launch pad 0B, employing a simpler design tailored for solid-fueled rockets like the Minotaur, was first used on a satellite launch in 2006. It has facilitated five Minotaur missions to date.

"It is a challenge," Nash said. "Fortunately, we've got a lot of good people. We've got several people who have moved here from the space program, primarily in Florida, and great support with NASA bringing people in from different centers. But we've been able to also home-grow a lot of talent from the local area here, from Virginia, Maryland and some from Delaware, a few from Pennsylvania. We're organically growing our younger engineers and technicians and placing them around the old crows who have been in this business for a long time."

Nash said his team of about 60 engineers and technicians is working a "fair amount of overtime" to support the rapid launch cadence.

"This is a lot of effort," Nash said. "The two state-owned MARS launch pads are right next to each other. We're in close proximity, so we have to work around each other."

Once the Antares is off the pad, attention at MARS will turn to the next Minotaur 1 launch in early November. The mission is sponsored by the Pentagon's Operationally Responsive Space office, a unit tasked with delivering tactical and research satellites on a tight budget.

The Minotaur 1's main payload is the STPSat 3 satellite, which hosts five technological research payloads and a de-orbit module. STPSat 3 is already at Wallops being prepared for the launch.

Then Orbital will commence work on its eight-launch contract with NASA for commercial resupply of the space station, beginning as soon as December.

At least two more Antares launches to the space station are on tap in 2014.

As long as the space station keeps flying, it will need supplies, experiments and spare parts from U.S. spacecraft like those developed by Orbital Sciences and SpaceX, NASA's other cargo transportation provider.

Wallops and the Mid-Atlantic Regional Spaceport have banked on it.