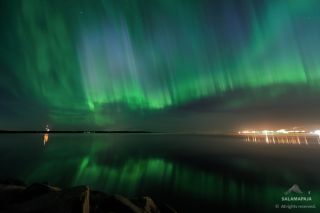 Thomas Kast captured this image of the northern lights at 2:15 a.m. on Aug. 31 from Oulunsalo, Finland.
(Image: © © Thomas Kast All Rights Reserved)

The dazzling pink spiral of the Pinwheel Galaxy shines in this stunning image recently sent in to SPACE.com by a veteran astrophotographer. [Read the Full Story]

The fiery surface of the sun is seen in brilliant detail in images recently sent to SPACE.com by astrophotographer Paolo Porcellana. [Read the Full Story]

- The northern lights dance is stunning blue and green hues as they light up the night sky over Oulunsalo, Finland in this captivating night sky photo sent in to SPACE.com. Photographer Thomas Kast, captured a marvelous photo of the northern lights around 2:15 a.m. local time on Aug. 31. The constellation Ursa Major (Great Bear) can be spotted toward the top right of the photo, just above the bright city lights of Oulo. [Read the Full Story]

Stargazing photographer B.G. Boyd captured these two beautiful images of the night sky over Arizona, showing the famed Big Dipper star pattern and the Milky Way galaxy. Here's how he did it. [Read the Full Story]

Solar flames blaze in this detailed photo taken by avid astrophotographer Göran Strand of Östersund, Sweden. “Incredibly beautiful to see how it hung freely over the solar disk,” Strand wrote SPACE.com in an email. Strand submitted this magnificent close-up image of a solar prominence on Sept. 4. [Read the Full Story]