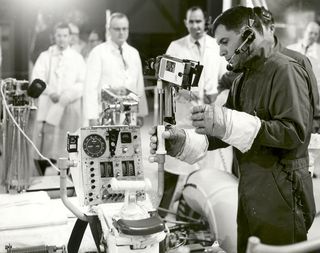 In this historical photo from the U.S. space agency, the lunar roving vehicle (LRV) qualification unit, built for the NASA-Marshall Space Flight Center by Boeing, is inspected after assembly at Boeings Kent Space Center near Seattle, WA, in January of 1971.

Built exactly like the three flight LRVs that transported astronauts during Apollo lunar missions 15, 16 and 17, the unit underwent extensive qualification tests to prove that the LRV would meet NASAs exhaustive specifications. The unit was to be used as a trouble-shooting tool for any possible problems encountered by astronauts while on the moon.