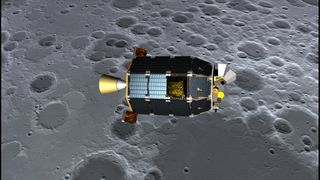 NASA's newest lunar spaceraft is in good shape as it tackles a month-long trek to the moon after a launching from Virginia last week.

"LADEE is doing fine and its trajectory to the moon is good," NASA officials said in a statement. "The LADEE spacecraft is currently in an elliptical orbit around Earth, about 162,000 miles (260,000 kilometers) in altitude. Mission controllers are now performing an extended checkout phase including guidance, navigation and control characterization, reaction control system tests, and on-board controller tuning." [See Spectacular Photos of LADEE's Night Launch]

LADEE's checkup included tracking, acquisition and ranging by all ground stations, they added. Mission controllers at NASA's Ames Research Center in Moffett Field, Calif., also had the probe perform a so-called "momentum dump" manuever, which reduced the spacecraft's spin to a normal level.

Shortly after launch, LADEE's reaction wheels, which are used to stabilize and orient the probe in space, experienced a technical glitch just after the probe's separation from its Minotaur V rocket, but controllers on the ground quickly solved the issue.

Once LADEE makes its close approach, mission controllers will fire the probe's engines, boosting it into a higher orbit. After two more of these burns catapulting the craft into ever-higher orbits, LADEE will perform its "lunar orbit insertion burn" on Oct. 6, NASA officials said.

"After that we are in lunar orbit," NASA officials wrote. "This LOI burn is one of the most critical phases of the mission, because without it working we do not get into lunar orbit."

The $280 million LADEE mission is tasked with probing the mysteries of lunar dust and the moon's very thin atmosphere from its low orbit around Earth's closest cosmic neighbor. LADEE is expected to perform about 100 days of science including hunting for the answer to a more than 40 year old moon dust mystery.

Apollo astronauts saw a strange glow on the moon's horizon before sunrise. Scientists think that it might have something to do with tiny dust particles lofted high into the moon's atmosphere. LADEE is designed to help them tease out the answer to that lunar riddle.