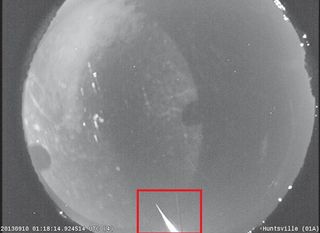 A NASA all-sky camera at the agency’s Marshall Space Flight Center in Huntsville, Ala., captured this view of a bright fireball at 8:18 PM Central Time on Sept. 9, 2013.
(Image: © NASA/MSFC)

A baseball-sized piece of a comet lit up the sky on Monday night (Sept. 9), becoming a brilliant fireball that streaked over the southeastern United States.

The small fragment of a comet disintegrated 3 seconds after hitting Earth's atmosphere when it was about 25 miles (40 kilometers) above Woodstock, Ala., according to NASA officials who tracked the fireball. NASA cameras positioned at the space agency's Marshall Space Flight Center in Huntsville, Ala., recorded videos of the fireball whizzing through the sky.

The meteor was speeding at a blistering 76,000 mph (122,310 km/h) when it entered the atmosphere. Skywatchers on the ground heard sonic booms because the cometary debris deeply penetrated the atmosphere, Bill Cooke, head of the Meteoroid Environments Office at Marshall wrote in a blog post. [See more photos of the baseball-size meteor fireball]

"Fireballs like this occur all the time over the planet," Cooke told SPACE.com via email. "However … our cameras in the Southeast pick up a bright fireball like this every month or so. We detected an even brighter event over Tennessee two weeks back."

People all over the Southeast who happened to be looking skyward Monday night were treated to the cosmic show. Concertgoers watching a Mumford & Sons show in an amphitheater in Pelham, Ala. saw the flash, and observers in Georgia also claimed to have seen the fireball streak past.

According to a post from the American Meteor Society written Tuesday, more than 250 people reported witnessing the fireball. Observers in Mississippi, North Carolina, South Carolina, Florida, Tennessee and Kentucky all claimed to see the flash of light.

The fireball was 15 times brighter than the planet Venus, and its flash of light rivaled that of the waxing crescent moon, NASA officials said. The meteor was not a part of any known meteor shower and its orbit took it far past Jupiter like many comets.

Although the celestial debris created an amazing fireball, there are probably not any meteorites on the ground because the fragile piece of comet was moving too quickly as it entered the atmosphere, Cooke said.

On Aug. 28, six cameras operated by NASA caught sight of one of the brightest fireballs captured by the network in five years. The asteroid responsible for the brilliant show weighed more than 100 pounds and was about 2 feet wide (0.7 meters). In certain areas, the meteor was 20 times brighter than the full moon.

Editor's note: If you snapped an amazing photo of the fireball or any other night sky view that you'd like to share for a possible story or image gallery, please send images and comments, including equipment used, to managing editor Tariq Malik at spacephotos@space.com.