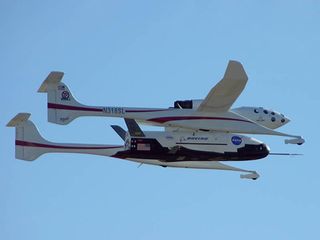 The first air drop of the X-37 experimental spaceship from the White Knight carrier craft was called off on April 6, 2006 due to high-altitude winds over Edwards Air Force Base in California. An April 7 attempt ended with the robotic space plane rolling o
(Image: © Alan Radecki)

Arobotic space plane was dropped today at high altitude, touching down underautonomous control, but encountered difficulties on landing and rolled off theend of a runway.

Afterseveral attempts, weather and technology merged today for a successful droptest of the X-37, a project of the Pentagon's Defense Advanced ResearchProjects Agency (DARPA) and the Space and Intelligence division of the BoeingCompany, with limited support from NASA.

TheALTV successfully executed its autonomous landing profile, Tedino told SPACE.com,"but the vehicle experienced an anomaly after touchdown at Edwards Air ForceBase, California and departed the end of the runway. The ALTV flight teamis assessing the situation and reviewing test data. No further informationis available at this time."

A DARPAstatement on the test flight was issued late today to SPACE.com.

Afterrelease, the ALTV touched down on runway 22 at Edwards AFB at 7:31 a.m. PDT.

"ALTV'sautonomous landing sequence and initial touch-down were flawless and fullyaccording to plan," Walker reported, "but ALTV did not stop in the distanceexpected and rolled off the end of the runway. ALTV's steering was nominal forthe full length of the runway."

The causeof the incident is not yet known, with the ALTV flight team now engaged inassessing the situation, Walker said.

"All flightdata has been recovered from ALTV. There was minor damage to ALTV--the noselanding gear is heavily damaged but the main landing gear and aircraft appearstructurally intact," Walker explained in the statement.

Theearly morning drop of the unpiloted X-37 took place high above the desertlandscape in the Mojave, California area. The drop took place at about 37,000feet, accomplished by taking the space plane skyward, tucked underneath theScaled Composites White Knight carrier plane.

WhiteKnight is operated by Scaled Composites of Mojave, California--the pioneeringfirm that used the same mothership to tote SpaceShipOne to altitude forrelease. It was SpaceShipOne, also designed by the firm that snagged the $10million Ansari X Prize by back-to-back piloted suborbital flights in 2004.

Therobotic space plane is classed by DARPA as the Approach and Landing TestVehicle and has been at the inland spaceport in Mojave, California sincemid-April of last year.

TheWhite Knight/X-37 mated combination has undergone a series of taxi and flighthops in preparation for today's first release of the vehicle. But the craft'sfirst drop test was plagued several times by local bad weather, as well astelemetry issues between the vehicle and ground controllers.

Earlyplans for the X-37 called for it to be ferried to orbit by the space shuttle ora throw-away launch vehicle. Once free in Earth orbit, the craft would remainin space for up to 21 days, carrying out a variety of experiments beforereentering the atmosphere and landing on a conventional runway.

Thoseplans were eventually cancelled, with NASA transferring its X-37 technologydemonstration program to DARPA in late 2004.

NASAdetermined that the X-37 ALTV did not meet the goals of the Vision for SpaceExploration and as a result transferred the program to DARPA. NASA's only rolein the drop tests is as a technical advisor, despite the large NASA logo on thevehicle.