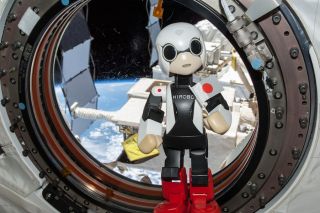 The world's first talking robot in space has uttered its first words in orbit, echoing famed moonwalking astronaut Neil Armstrong's "one small step" line, but this time for all robot-kind.

The small robot astronaut Kirobo, which was built by Japanese scientists, spoke its first orbital words while floating aboard the International Space Station. The robot launched to the space station in August aboard an unmanned Japanese cargo ship to help scientists study robot-human interaction.

A newly released video of Kirobo talking in space shows the robot's mouth light up as it delivers its first message, in Japanese, on Aug. 21. [Photos: Meet Kirobo, Japan's 1st Talking Space Robot]

"On August 21, 2013, a robot took one small step toward a brighter future for all," Kirobo says, according to a translation from one of the project's partners, PR company Dentsu Inc.

Kirobo only speaks Japanese and is designed to help researchers explore the possibilities of coexistence with robots during long space voyages of the future. Its mission, called the Kibo Robot Project, was developed by the Research Center for Advanced Science and Technology at the University of Tokyo, the Toyota Motor Corp., Robo Garage and Dentsu Inc.

Measuring just 13 inches (34 centimeters) tall, the robot's name is a mash-up of the word "robot" and Kibo, which means "hope" in Japanese and is the name of Japan's research laboratory module on the space station.

Kirobo is awaiting the arrival of Japanese astronaut Koichi Wakata, who is set to become the first Japanese commander of the space station when he gets there in November or December this year. Wakata will also become the first person to converse with a robot in space. His historic chat with Kirobo is expected to take place in December.

The robot's technological capabilities include voice-recognition, natural language processing, facial recognition, a camera and emotion recognition. Kirobo also has a near-identical twin named Mirata on Earth, designed to allow engineers on the ground to troubleshoot any malfunctions that may arise with Kirobo in space.

Kirobo is expected to return to Earth in December 2014.