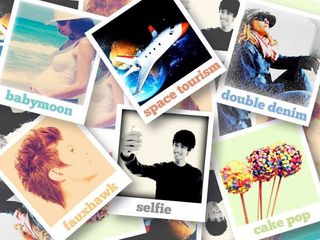 "Space tourism" is now "buzzworthy," at least according to one prominent dictionary.

The newly-added entry describes "space tourism" as "the practice of travelling into space for recreational purposes." Oxford Dictionaries Online also includes with the entry an example of the "mass noun" used in a sentence: "Space tourism could be a $10 billion-per-year industry within two decades." [Photos: The First Space Tourists]

"Space tourist" is listed as a derivative of "space tourism" in the free online dictionary. The ODO is separate from the Oxford English Dictionary, which focuses on the historical use of words.

The addition of "space tourism" was a part of the ODO's quarterly update, which also included the aforementioned "buzzworthy" (meaning "likely to arouse the interest and attention of the public, either by media coverage or word of mouth"); "selfie" ("a photograph that one has taken of oneself, typically one taken with a smartphone or webcam and uploaded to a social media website"); and "twerk" ("dance to popular music in a sexually provocative manner involving thrusting hip movements and a low, squatting stance").

The new entries reflect that the words and phrases have become accepted within the English language, as spoken and used today.

"New words, senses, and phrases are added ... when we have gathered enough independent evidence from a range of sources to be confident that they have widespread currency in English," Angus Stevenson with the Oxford Dictionaries Online explained in a statement. "On average, we add approximately 1,000 new entries to [the] Oxford Dictionaries Online every year, and this quarter's update highlights some fascinating developments in the English language."

The term "space tourism" may have a longer history, but its propagation into the modern lexicon began in the 1990s as private rocket companies and adventure tourism firms started marketing suborbital and orbital opportunities for the public to travel into space.

"Space tourism is a movement that has existed since the dawn of private spaceflight," Emeline Paat-Dahlstrom, co-author of the 2011 book "Realizing Tomorrow: The Path to Private Spaceflight" (University of Nebraska Press) wrote in an e-mail to collectSPACE.com, responding to "space tourism" being added to the ODO. "It's a realization that access to space is a catalyst that will open the next frontier for the trillion dollar tourism industry."

Since 2001, Virginia-based Space Adventures has offered seats onboard Russian Soyuz spacecraft bound for the International Space Station (ISS). To date, seven millionaires and billionaires have embarked on self-funded spaceflights through the firm, with an eighth slated for a mission in 2015.

Space Adventures announced in 2012 that famed-soprano Sarah Brightman would train for a flight to the International Space Station in 2015.

Virgin Galactic, a company within business magnate Sir Richard Branson's Virgin Group, has signed up more than 600 customers for suborbital flights on its SpaceShipTwo, a rocketplane based on the design of the 2004 Ansari X Prize-winning SpaceShipOne. The company is planning to begin flying paying clients in 2014.

Other companies including XCOR Aerospace and its Lynx rocketplane, Boeing with its CST-100 capsule, Excalibur Almaz using upgraded Soviet-era spacecraft and Bigelow Aerospace with plans for inflatable space stations, have put forth plans to fly space tourists as well.

The Oxford Dictionaries Online is among the dictionaries compiled by Oxford University Press, which also includes the Oxford English Dictionary (OED). Whereas the content in the ODO focuses on current English, including modern meanings, the OED is a historical dictionary, which serves as a record of all the core words and meanings in English spanning the past 1,000 years.

The OED added "space tourism" in 2004 as a subordinate to the word "space."