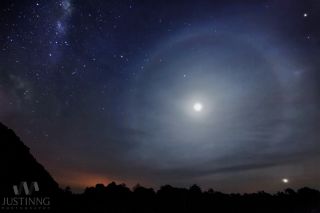 Justin Ng of Singapore captured this composite image of the Milky Way and a lunar halo over Mersing, Malaysia. Planet Venus appears to the bottom right of the image with planet Saturn near the top of the moon. The fourth brightest star in the night sky, Arcturus, is seen near the top right corner of the photo. The image was released Aug. 14, 2013.
(Image: © Justin Ng )

Photographer Justin Ng of Singapore captured this breathtaking image of a lunar halo over Mersing, Malaysia.

The glittering band of the Milky Way, which is a composite photograph, appears adjacent to the halo of the moon. Planet Venus glows toward the bottom right of the image, and planet Saturn can be spotted near the top of the moon. The fourth brightest star in the night sky, Arcturus, appears near the top right corner of the photo.

Photographer Justin Ng captured the image, which is part of a 12-hour time-lapse movie set at this location, just prior to the peak of the Perseids meteor shower on Aug. 13 and the conjunction of the moon and planet Saturn on Aug. 14.

"The Milky Way wasn't really visible at this point, as the sky was still bright, but as the moon went lower, the Milky Way galaxy became visible gradually and the entire process was filmed as part of my 12-hour time lapse at this location," Ng told SPACE.com in an email.

The halo in the photo forms a 22-degree circle around the moon. Light from the moon is diffracted by ice crystals as it passes through Earth's atmosphere, causing this beautiful phenomenon. As light bounces off the crystals, a circular pattern is created when the crystals are all of the same general shape. The darker regions within the halo indicate the absence of light hitting those crystals.