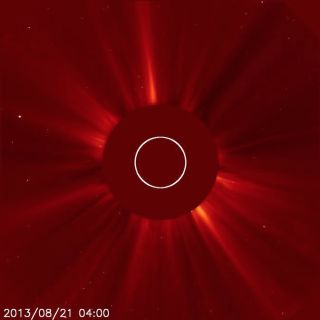 On August 21, 2013 at 1:24 am EDT, the Sun erupted with another Earth-directed coronal mass ejection, or CME, a solar phenomenon that can send billions of tons of particles into space and reach Earth one to three days later.
(Image: © NASA/ESA SOHO)

The sun fired off an intense solar storm at Earth Wednesday (Aug. 21) — the second in two days — hurtling billions of tons of charged particles at our planet, but should not pose a threat to people on the ground, NASA says.

The solar eruption, called a coronal mass ejection, occurred yesterday at 1:24 a.m. EDT (0524 GMT) and sent charged particles streaking outward at 380 miles per second. That's just over 1.3 million mph (2.2 million km/h). The solar fallout from the sun storm is expected to reach Earth within the next three days.

"These particles cannot travel through the atmosphere to harm humans on Earth, but they can affect electronic systems in satellites and on the ground," NASA officials explained in a statement. [Solar Max Photos: Sun Storms of 2013]

"Earth-directed CMEs can cause a space weather phenomenon called a geomagnetic storm, which occurs when they funnel energy into Earth's magnetic envelope, the magnetosphere, for an extended period of time," NASA officials said in a description of Wednesday's solar eruption. "The CME’s magnetic fields peel back the outermost layers of Earth's fields changing their very shape. In the past, geomagnetic storms caused by CMEs of this strength have usually been mild."

According to Spaceweather.com, a website that tracks space weather and skywatching events, the two solar eruptions this week were triggered when vast rope-like filaments of magnetic solar plasma erupted. The CMEs should arrive at Earth in time for weekend aurora watching for stargazers at high latitudes.

The sun is currently in an active phase of its 11-year solar weather cycle and is expected to reach its peak activity later this year. The current cycle is known as Solar Cycle 24.

Editor's note: If you snap an amazing picture of the northern lights or any other night sky sight that you'd like to share for a possible story or image gallery, send photos, comments and your name and location to Managing Editor Tariq Malik at spacephotos@space.com.